Grappa is Italy’s national spirit per eccellenza, 100% Italian according to tradition, history, culture, and production technique, and obtained exclusively from one solid raw material: grape pomace. Pomace is what remains of the grapes after pressing them for wine: the skins and pulp. It is transferred to a copper boiler called an alembic, where the steam extracts the alcohol still contained within the pomace.

“If wine is the poetry of the earth, grappa is its soul” (Mario Soldati)

The aim of distillation is not just to concentrate the alcohol from the pomace, but also to extract its aromas, which characterizes our grappa. In fact, a good grappa is able to capture the essence of the grape variety used to make it, to the point where it may even express a recognizable terroir.

Although there has been mention of the distillation process in writings that date as far back as the 1st century A.D., it is likely that the first production of grappa in the distillation of pomace dates back to the 17th century. 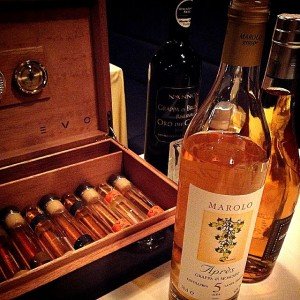 Some people suppose that this distillation evolved step by step beside that of winemaking, as opposed to beginning in entirely different historical periods (as others believe). What is certain is that by the 17th century, spirits obtained from wine or pomace wet the throats of the Doges of Venice.

Today, the regulations of the European Council stipulate that the grappa denomination may only be used for distilled pomace made in Italy (with the exceptions of Canton Ticino, Switzerland and ice grappa made in Canada); our national spirit may also avail itself of a geographical indication. In other words, in combining the grappa denomination to a geographical area, grappa will always and forever be Italian, without the need to specify this on the label. It is sufficient to say just GRAPPA..

Today, following the creation of the National Institute of Grappa and ANAG (National Association of Grappa Tasters), the informed consumption of our national spirit has grown, even reaching female and younger demographics. The former associates grappa with the “sweetness of living,” while the latter sees it not as hard alcohol for Saturday night, but rather as something to sip slowly in the company of friends, an ode to calm reflection and the joy of living.