Grappa has always been on Italian tables. Whether a 2-liter bottle of homemade or a prized grappa from a historical distillery, this spirit has always been ready to round off our meals and accompany us around the table.

Read our post about what grappa isn’t to understand this spirit better!

Notwithstanding its popularity at our tables, few cookbooks or even books about distilling mention that grappa is an important ingredient in beloved, traditional recipes. In fact, grappa’s use in recipes is likely as old as the distillate itself. Grappa naturally enhances flavors, and can give great personality to rich dishes and desserts with its aromatic notes.

There are truly many culinary traditions and popular dishes that use grappa.

In Piedmont, for example, grappa is used in the preparation of brus, or the miniscule scraps of cheese—usually robiola or castelmagno—that are left to ferment and amalgamate with a generous dose of grappa. The result is a flavorful cream that’s perfect spread on a thick piece of toasted homemade bread. It’s a real treat for those who love strong flavors!

The bugie, also called chiacchiere of Carnival—deep-fried, sugar-dusted—are always made with a shot of grappa, as are apple-raisin fritters. The grappa gives the dough a soft, aromatic boost. Try making these delicious treats with grappa di Moscato Aprés or the fruit-based acquavite di Marolo!

In Friuli, for another example, sgnape – dialect for “grappa”—can be found in numerous recipes. It’s used in soups of meat, beans, and vegetables, called jota; in tripe soups (sguazet); and in desserts like presnitz, a typical sweet from Trieste made from puffed pastry wrapped around a filling of nuts, spices, and chocolate.

With the last cold and rainy days of the season, we’d like to share a couple of original recipes, using grappa’s distinctive, aromatic flavors.

This simple, traditional recipe is from the Valtellina.

Mix the two flours together in a large bowl and add grappa, water, and beer until the mix is smooth (thick, not watery). Add a pinch of salt and pepper. Heat abundant oil in a pan, and then dip each slice of cheese in the mix, adding them to the pan to fry until golden brown on both sides. As they come out of the pan, set aside on paper towels to drain excess oil. Serve hot.

Add an exciting touch to your typical gnocchi 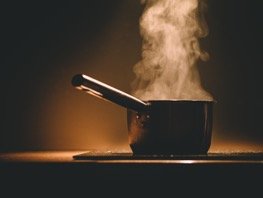 Melt a chunk of butter in a pan over high heat and add the speck and a shot of Grappa dedicata al Padre Marolo. This grappa is high in alcohol with full-bodied flavor and warmth. It will give your sauce a delicious touch, without covering the other flavors.

Pour the speck and sauce into a bowl, letting it cool slightly. Add the breadcrumbs, ricotta, grated Parmigiano, eggs, and flour, plus a pinch of salt, pepper, and nutmeg. Mix well, then let rest in the refrigerator for half an hour.

Bring abundant salted water to a boil. Form gnocchi or quenelle with the help of two spoons, then dropping them in the water, letting them boil until they float. Fish the gnocchi out with a slotted spoon, and serve with abundant melted butter and the remaining Parmigiano Reggiano.

And, of course, accompany with a quick shot of Grappa dedicata al Padre Marolo. Buon appetito!