The Story Of Marolo, A Territorial Grappa

With this post we conclude the interview with Paolo Marolo about the history of the Alba distillery, which in 2017 celebrates 40 years in business,  from the rediscovery of grappa in the USA to his son Lorenzo joining the business, and new ambitious plans to promote the Italian spirit par excellence through hospitality in the area.

READ THE HISTORY OF MAROLO HERE CHAPTER I, CHAPTER II and CHAPTER III

In the ’90s, the Marolo distillery began a process of expansion and internationalization.

In 1994 work started on new offices and new warehouses. They were fast-paced years, in which we enjoyed much appreciation and began to branch out into foreign markets with renewed energy. It was during that decade that we entered the American market, still one of our company’s most important reference points today.

How did you present yourselves in a market that was already mature as far as the supply of spirits was concerned?

Above all, by demonstrating that grappa is not what it used to be.

By demonstrating that the grappa available up until then in North America did not represent the quality that in the meantime we were achieving in our country.  As had happened in post-war Italy, the  Americans only knew industrial grappa – rough and second-rate – that they denigrated as “fuel. We began from the basics, proving that the Italian spirit par excellence could be something elegant and sensual with a distinctive character.

Which channels did you choose to “storm” the American market?

Grappa is limited. Unlike many spirits that can be obtained from cereal crops and plants cultivated for distillation, grappa depends, and will always depend, on the quantity of pomace produced in Italy. So it is a niche beverage, for connoisseurs who select and recognize a top quality, local product, and are prepared to pay for it.  Our prime channels have always been top end HoReCa – restaurants, specialist stores, selected hotels and clubs. Some special products like Milla, our  Grappa and Chamomile liqueur, have been, and continue to be very successful among the mixology fraternity as they combines extremely well with other ingredients to create unique cocktails.

Talking about special products, is it true that Marolo has always made liqueurs as well as grappa?

Lessons from the great Pinot Gallizio and my studies to prepare my courses in Herbalism at the Oenology School in Alba have become an integral part of our distillery’s  know-how.   From the beginning, I made liqueurs using mostly extracts from herbs grown in Piedmont, which is the number one region for the cultivation of aromatic and medicinal plants, with over 750 hectares earmarked for the purpose.  As well as Milla, we produce Honey and Rhododendron Grappa (Slow  Food presidium),  Marolo Chinato (a wine flavoured with infusions of herbs and Cinchona calisaya, or Peruvian bark), and Vin Brulé.  In 2015 we launched a new product with an ancient, glorious history onto the market, the legendary  Amaro Ulrich. Invented by Domenico Ulrich, one of Piedmont’s most noted physicians-herbalists in the late 1800’s, it was rediscovered and revised by our distillery according to the original recipe to promote the liqueur-making tradition of our area. 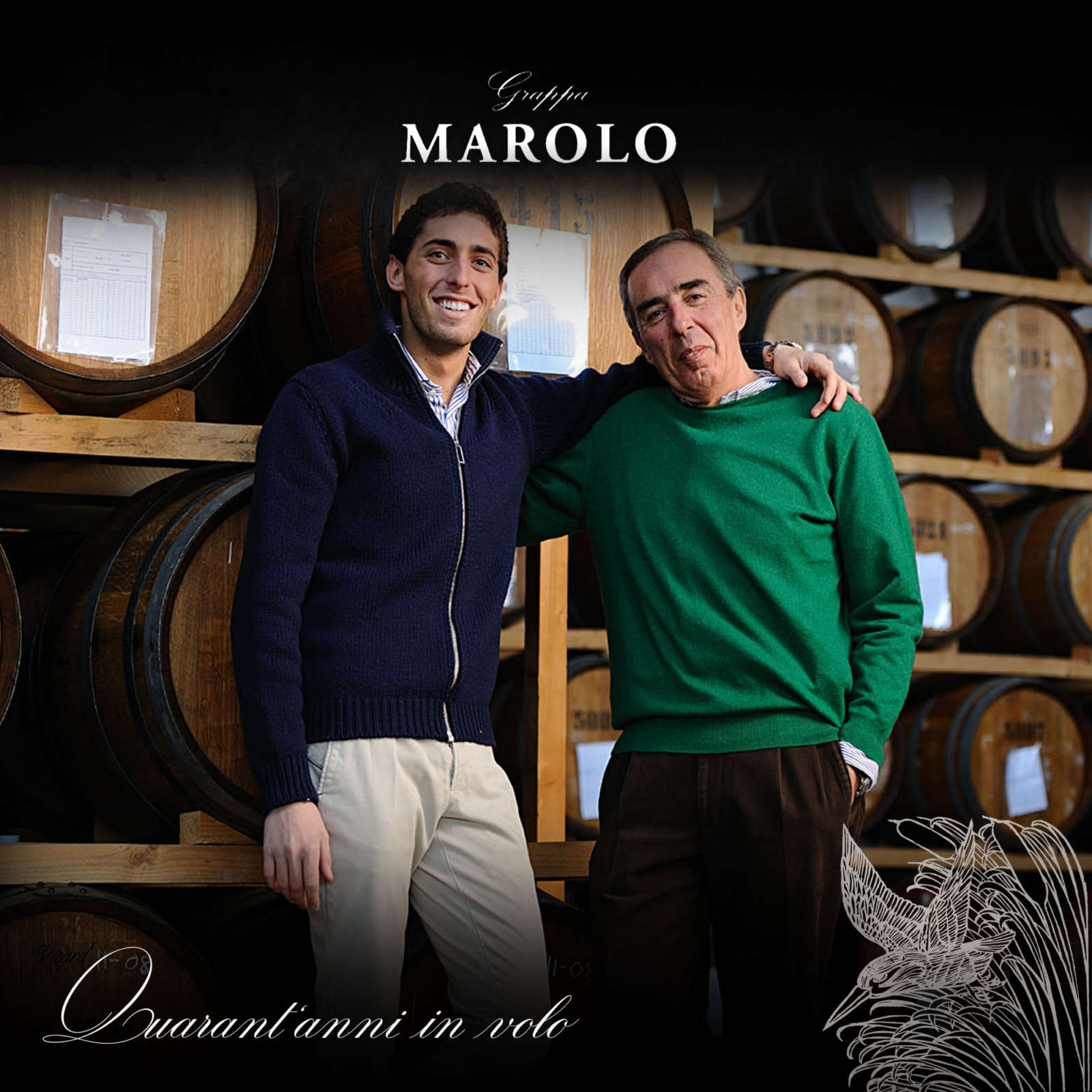 Your son Lorenzo joined the company in 2014.

After his oenology studies and a degree in Management from Bocconi University, Lorenzo decided to carry forward the adventure I began in 1977, putting himself to the test and learning the craft of “grappaiolo”, or grappa maker, to carry on our traditionally artisanal production. In the meantime he works at making our grappa known around the world, taking up the communication and innovation challenges of the new millennium.

With regard to innovation, do you have many plans in the pipeline?

Let’s begin with the products.

As well as Amaro Ulrich, we have recently launched several products that are the result of extensive research into ageing. In 2016  we created our double cask grappas,  Doppio Fusto. Distilled in a bain marie alembic, they are subsequently left to rest in casks of two different kinds of wood, which give the final product rich and enveloping personalities with extremely appealing spicy and fruity notes. To mark our 40th year in business in 2017, we will present our Grappa di Barolo aged for 10 years in a single Barolo Chinato cask.  This very limited, elegantly bottled edition, the result of lengthy research,  is a hymn to a grappa that is  100% Piedmontese in its raw materials and in the ageing casks.

Grappa is one of the Piedmont region’s  products par excellence, and yet up to now it has never been promoted in tourism terms. Our “territorial project” envisages the creation of a hotel with a Grappa theme in the heart of the hills,  which are a World Heritage Site. This autumn, in Barolo, we will begin work on the construction of a boutique hotel. The project provides for the creation of a special polygonal glass structure consisting of as many elements as there are Barolo Additional Geographical Mentions (or crus), each inscribed with the name of one. This architectural element will enhance the underground ageing cellar, and will be a monument to the extraordinary oenological richness of the king of wines, from whose pomace Marolo has always obtained distinctive single-varietal and “single vineyard” grappas.  Our grappas are unique because they are unequivocally tied to their zone of origin, even to a single plot of vineyard within a particular cru – this is our ideas of promoting the territorial nature of grappa.