History of the alembic in ancient times

The history of the alembic begins with the techniques of distillation, a highly advanced system of boiling for “extraction.” The raw ingredients, which are heated to the right temperature via water vapor, release their essential oils, aromas, alcohol (in grappa’s case), and other substances that, once cooled, are collected in a vessel.


An interesting fact about distillation is that, operating under a controlled temperature, the vapors can be separated to extract the different substances according to their evaporation point. The result is an entirely new substance, a “pure and ethereal” liquid that contains the conserved, noble spirit of the raw materials. This is where the history of the alembic begins, with its double ties to the history of distillation. Once the technique was devised and understood, distillers began studying and improving upon the instrument used to make a perfect distillate: the alembic.

The word alembic is derived from the Arabic al-‘ambiq (to distill), which in turn coms from the Greek ambix (cup). In Latin, they used lemma alembicus, and old French alembic. The Arabs ultimately succeeded in preserving and perfecting distillation techniques in ancient times, and, after the fall of the Roman Empire in medieval times, saved important knowledge (especially regarding the extraction of essential oils) from Western alchemists, who used it for more spiritual applications, on up until modern distillation techniques and the industrial revolution. The alembic is composed of three parts: the “cucurbit,” or still pot containing the liquid to be distilled, which is heated by flame; the “head” or “cap,” which fits over the mouth of the cucurbit to receive the vapors; and an attached downward-sloping “tube” leading to the “receiver” container.

Sources point to the history of the alembic beginning in southwestern Slovakia. Here, in the Abrahám archaeological site, the oldest remains of an ancient alembic have been found. The artefact, dating back to 4000 BC, is composed of three mobile parts for distillation in one single section: boiling, condensation, and collecting. The liquid was warmed in the lower vessel to vaporize and condense on the sides of the convex cover, which funneled the distillate in a ring. The technique is described as “ring vessel extraction,” precursor of the modern reflux drum. 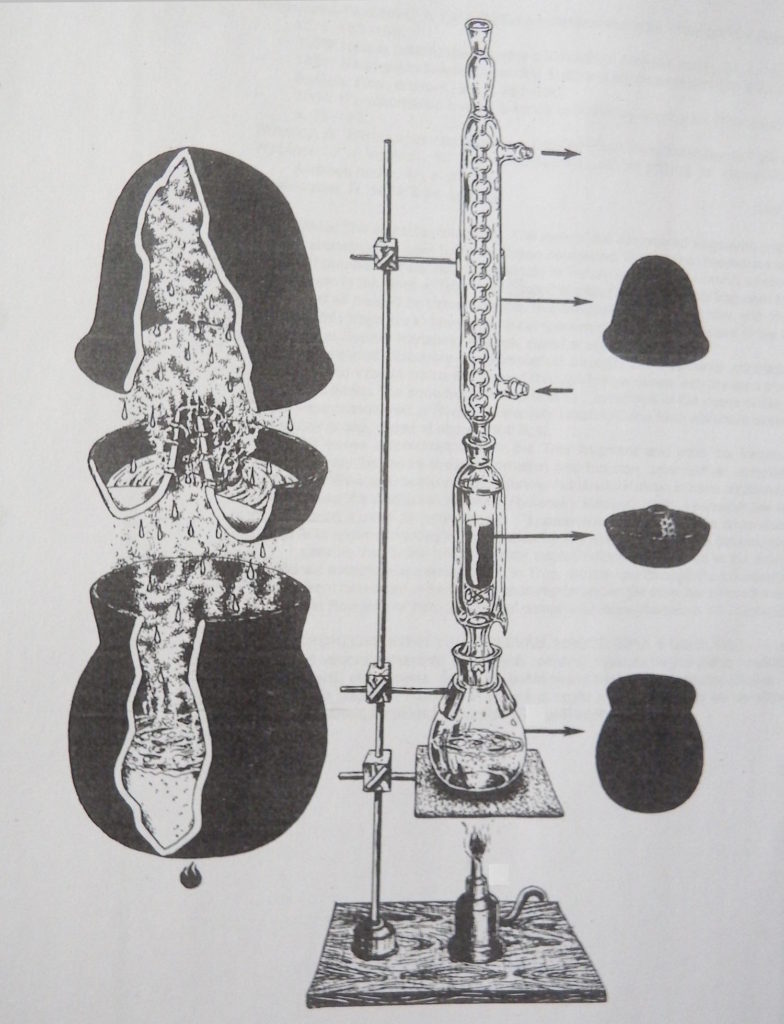 Model for the “ring vessel extractor”(Ryšánek, 1993)

The use of ring vessel distillers reached the high valley of the Tigris River at Tepe Gawra, near Mosul. Here, archaeologists have excavated fragments of ceramic alembics that date back to 3500 BC. Similar to the Slovakian alembic, these differ in the small holes inside the ring, which are thought to be for separating essential oils from the water. It’s therefore likely that over 5000 years ago in Mesopotamia, they already had the technology for extracting oils, perfecting the technique much later.

Reconstruction of an essential oil distiller from Tepe Gawra, Iraq, Uruk Period, circa 3500 BC (Ryšánek & Václavû, 1989) 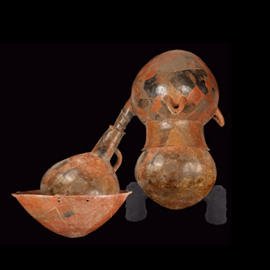 Alembic from Pyrgos 1800 BC

Stepping ahead in the history of the alembic, we come to the civilization in Pyrgos on the island of Cyprus. Recent archaeological finds have uncovered workshops for the production of perfumes and perhaps distillates from 1800 BC. The artefacts demonstrate advanced technology: the “head” of the distiller was placed over the warm pitcher, while the beak, which worked as the “condenser,” transported the vapors to a condensation chamber immersed in water. Grape seeds and a wine jar were also found near the distiller, leading us to believe that the artefact is concrete evidence of alcoholic distillation using fermented liquids.

The ancient alembics belie the idea that distillation is a modern invention, and contradict the thesis that refrigeration systems weren’t used before the year 1000.

First Century BC | THE PAKISTANI CONDENSER

A similar technique to that from Crete was found in Shaikhān Dheri in the Peshawar Valley of Pakistan. The distiller, which is from the First Century BC, is very similar to future alembics. The ceramic condensation chamber was immersed in an earthenware basin to increase yield of the final product (which was stamped and marked for sale). 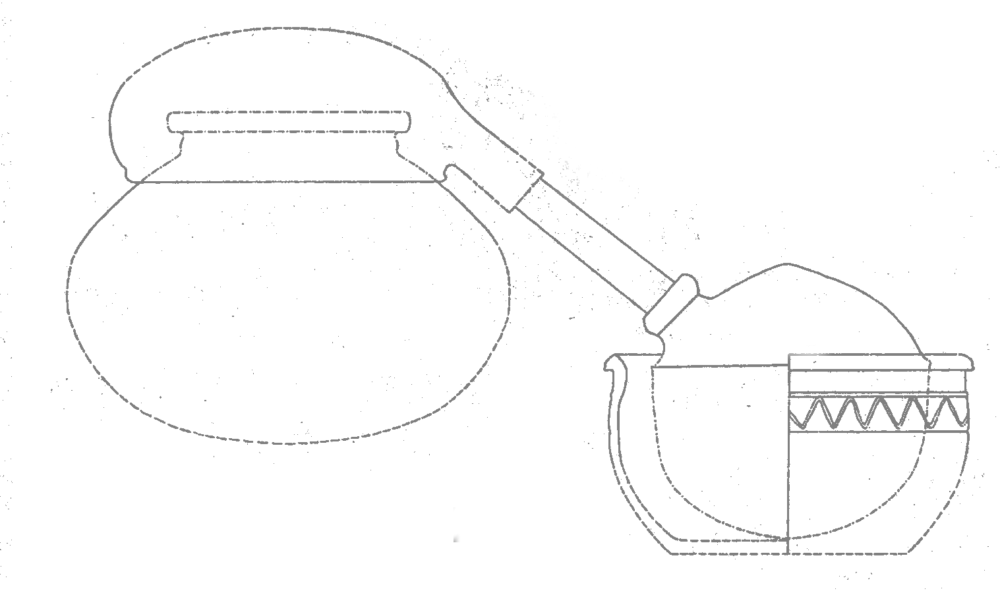 It’s not certain whether ancient peoples distilled essential oils or alcoholic drinks; if it was used for rituals, magic, inebriation, or simply cosmetics. But they perfected their technologies, making distillation a part of diverse civilizations, each very different and distant from another

This article is based on the research and images provided in Creative Common License by Giorgio Samorini, an independent researcher specializing in ethnobotany. Creative Commons Attribution License – Noncommercial – No Derivative Works 3.0 Unported.

Of course! Could you make us some examples, so we can research more and offer new contents. Thanks!

Don’t forget the Tagine, a piece of Moroccan water-less cookware that used the condensation principle for millennia
https://en.wikipedia.org/wiki/Tajine
.

You’re absolutely right! Tajine is an ancestral distillation method that resembles those found in Slovakia, in the municipality of Abrahám

This website uses cookies to improve your experience while you navigate through the website. Out of these cookies, the cookies that are categorized as necessary are stored on your browser as they are essential for the working of basic functionalities of the website. We also use third-party cookies that help us analyze and understand how you use this website. These cookies will be stored in your browser only with your consent. You also have the option to opt-out of these cookies. But opting out of some of these cookies may have an effect on your browsing experience.
Necessary Always Enabled
Necessary cookies are absolutely essential for the website to function properly. This category only includes cookies that ensures basic functionalities and security features of the website. These cookies do not store any personal information.
Non-necessary
Any cookies that may not be particularly necessary for the website to function and is used specifically to collect user personal data via analytics, ads, other embedded contents are termed as non-necessary cookies. It is mandatory to procure user consent prior to running these cookies on your website.
SAVE & ACCEPT
wpDiscuz
4
0
Would love your thoughts, please comment.x
()
x
| Reply