The History Of Marolo, Origins Of A Passion

In June this year, Marolo will celebrate its 40th anniversary. An adventure that, from the end of the 1970s, has led the Alba distillery to not only distinguish itself by the high quality of its products, but has also forged strong links with the area and, more generally, has written a chapter regarding the development of grappa from being a low quality product to one of excellence throughout Italy

A history of contemporary grappa that has yet to be written and that we would like to describe from the point of view of our experience. Follow us, because in this post and the following one, we will describe the birth and conquests of the Marolo distillery, recounting at the same time a part of the history of Alba and Piedmont distilleries.

Our outstanding interviewee will be Paolo Marolo. He is not only an expert regarding grappa, with great experience, but also a farsighted entrepreneur who has been able to link his business instinct with his knowledge of his birthplace, thus creating via the grappa product unbreakable links with the territory and hills recognised today as a UNESCO cultural heritage site.

Paolo Marolo, can you tell us about your first encounter with spirits?

To answer this question I must go back to the 1960s, when I was just a kid. My parents owned a famous café in Alba, the Umberto café in Piazza Savona (now Piazza Michele Ferrero).  I remember my father producing, in the cellars, wine for the bar, and also vermouth, one of the most highly appreciated apéritifs in those days. Among the bottles displayed on the shelf, there was also grappa, although it was very different from the grappa we know today.. 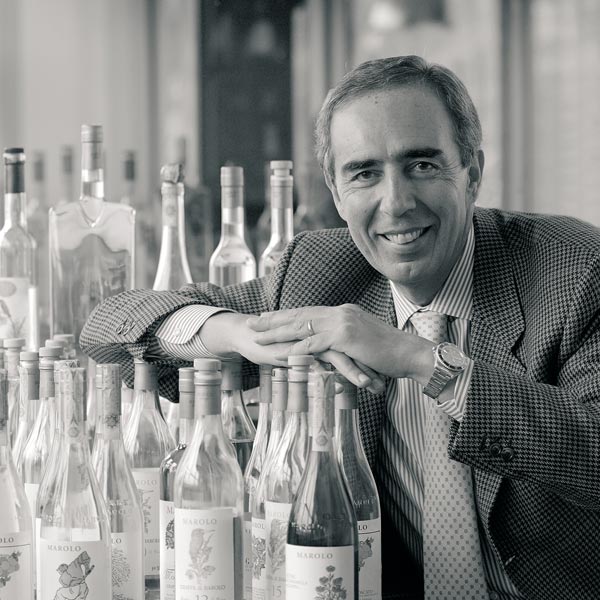 Paolo Marolo, founder of the distillery

Can you tell us more?

At that time grappa was called branda, from the Piedmontese word brandé, which literally means ‘to burn’, ‘working hard’, ‘fast & furious’. A real man’s drink, which cut into your stomach. Those who drank it included railway workers covered in soot, cellarmen with calloused hands, porters who unloaded goods, men who started the day with a couple of glasses. Grappa, until the 1970s, was really a substitute for food.  By midday my father had already finished two bottles. To help you understand, I will remind you that a coffee at that time cost 50 lire while a small glass of grappa cost 15 lire.

What types of grappa were available to buy?

There was really only one type of grappa: clear, almost transparent, with a sharp, stinging taste, very high in alcohol. It was drunk on its own, in coffee, or flavoured. I remember that we topped up some bottles with peppermint syrup, shook them thoroughly, and served the flavoured grappa in glasses.  It became known as ‘grigioverde’ (greyish green) because of its colour. Following the introduction of continuous distilleries in the 1960s, due to the enormous demand, grappa was a rather poor quality alcoholic drink, distilled with a view to quantity rather than quality. It was considered to be a by-product of wine-making, a dose of ‘fuel’ to use a euphemism. While at the beginning of the century there were over a thousand small producers of grappa, in the post-war period the number was reduced to a few hundred, all big industrial plants.

You, however, founded the School of Oenology

I had followed my practical inclinations and enrolled at the wonderful Regio Istituto Umberto I. At that time it was a university level School of Oenology, one of very few in Italy. Anyone who entered that School knew that his future was assured, that he would work in the world of wine and oenology, assuming prestigious roles.  It was by no means easy to complete the six year course and there were only a few dozen students, half of whom abandoned the course before completing their studies. There were however state-of-the-art laboratories, excellent teachers and close links with wine producers. We studied scientific matters and worked on practical as well as theoretical aspects, which was often hard. In order to register on the course it was necessary to produce a medical certificate stating that we were of a healthy and strong constitution.

Was it there that you developed a passion for spirits?

Let’s say that the School of Oenology fostered my interest. Not as a student but as a teacher. After graduating in 1967, they offered me the possibility to give a few lessons at the School. I gave up biology for teaching, which I never abandoned. A few years later, the then Principal, Vainer Salati, offered me the possibility to teach a course on Herbs. He aimed to retrieve the teachings of a famous pharmacist from Alba, Piot Gallizio, who was also a painter, artist and inventor.

Were you a pupil of Gallizio?

Indirectly. His classes, which began in 1946 and ended in 1962, the year of his death, were out of this world for his students, who loved him dearly.  Amongst his passions was the creation of liqueurs and flavourings from local herbs, which was why he was invited to teach at the Alba School of Oenology. Over the years, Galliozio had left precious notes which I recovered and studied with dedication and passion. We produced a dispensary for the students and I set up the course in 1972. Amongst the proposed lessons there was one on distillation, which we addressed from both a theoretical and practical viewpoint.  It was during the preparation for that course that I distilled grappa for the first time. I experimented with infusions of herbs for the liqueurs, and with the production of vermouth. Those were notions that even today are at the heart of the experience of Marolo and they constitute an inexhaustible source of inspiration for new products such as, for example, Amaro Ulrich. 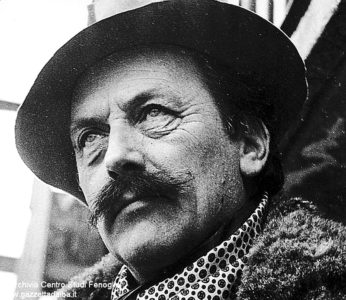 PINOT GALLIZIO
Giuseppe Pinot Gallizio was one of the most influential people in post-war Alba. He had an overwhelming, complex, contradictory character.  He was a pharmacist, chemist, district councillor, a student of ethnology and archaeology, a partisan. But above all, he was a productive and genial painter, one of the founding fathers of the International Situationists, whose members included world-famous artists such as Guy Debord, Michèle Bernstein, Ralph Rumney, Constant. Amongst his numerous passions, his love of herbs held a special place in his heart. Gallizio defended the use of herbs in winemaking, to the same level as the use of Langhe and Roero in the preparation of liqueurs and bitters.

After the war he founded a laboratory baptised ‘The Chemical Vegetable’, where he commercialised Erbasana, a liqueur halfway between an elixir and a bitter. From 1946 until he died, he devoted himself to education, setting up the first course in ‘Medicinal Plants and Oenological Herbs’ at the Alba School of Oenology.