History Of Marolo, On The Wings Of The Kingfisher

In 1977 the Distilleria Santa Teresa (Saint Teresa Distillery) was founded, linking mature experience with the teaching of the Alba School of Oenology and, immediately, emphasising the link with the indigenous Piedmont vines.  Even the first labels resulted from a meeting?

Just like that. When the grappa was made, a grappa which I considered to be both traditional and innovative, I wanted to find appropriate ‘clothing’. Something that harked back to tradition but which broke the link with the classic postwar depictions. Let me be clear, perhaps today those labels are ‘vintage’, but at that time they were all identical: wine labels indicated the name of the appellation, along with some sort of medal or heraldic symbol. Sometimes producers purchased pre-printed labels to which they added their name, by hand.  In short, I wanted something different for my precious product.

Who did you turn to?

At that time I used to meet up with a large group of producers in Verduno.  We used to meet to chat, exchange our experiences, have a drink.  I told them about my search for a label for my grappas and they showed me a piece of work by Gianni Gallo. I was impressed. These days I would have written an email but then I decided to go and see him.

Where did he live?

In Dogliani. He could be found at the Bar Roma or at home, in the remote Ribote farmhouse, which had become his creative laboratory.  I arrived there and said, “I have seen your work and I like it. Could you work on a label for my grappas?” His response was brief, “I don’t do labels.”

In fact, at that time Gianni Gallo only made designs for his friends.  How did you convince him?

I had taken some samples with me. I knew that Gianni preferred exchange rather than money, whether in terms of human relationships or barter. And, of course, he liked drinking.  After having sampled the grappas, he gazed at me and said, “Do you know what I am thinking?” “What are you thinking?” “An old grappa from Vigliecca (a distillery in Dogliani, no longer in business), bartered for a magnificent Vigliecca grappa.  You know I like it.  Perhaps I can do something for you.” Thus began a relationship that lasted till he died.

Which were the first labels designed by him?

It was in 1978.  I had already produced three grappas the previous year from marcs of Arneis, Dolcetto and Nebbiolo.  I could not telephone Gianni, he did not have a telephone.  I had to get in my car and drive to his Ribote farmhouse.  After a couple of months, I went to him and asked if he had finished the labels.  He replied, “Oh, not yet.”  And he would ask for another bottle.  After a couple of vain attempts, I was able to obtain a phone number, not his but that of his neighbour.  I would call him and would hear his friend shouting to him to come to the phone.  Finally he gave me two pieces of paper.  I said to him, “But I have three grappas.” He replied, “I have designed two labels. For Nebbiolo and Dolcetto we will change the colours.”

What was on the labels?

They were black and white sketches on paper.  An oil lamp for the Arneis grappa.  A bare willow tree for the Dolcetto and Nebbiolo grappas.  At first sight I didn’t think much of them.  But I had only a few bottles, I wanted to make an attempt.  Thus came about a small miracle.

We went to a printer with Gianni Gallo.  He followed every step of the creative process.  We selected the colours and tried some prints.  The essential characteristics took shape, they started to shine out from the white background.  I understood the importance of the work, the novelty.  Grappa labels at that time were all black, grey or brown, with some inscriptions.  Mine were white , with a vibrant, realistic drawing in the middle.  On a shop shelf they were the first to be noticed.

It was one of his masterpieces: the kingfisher perched on bullrushes and marsh grasses, which soon became the logo of the distillery.  He later designed a version with the kingfisher in flight, an icon which we selected to celebrate the 40th anniversary of our business.  Then came labels that made history and which still stand out today: the man with the hoe (1978), the bunch of Moscato (Muscat) grapes (1980), the rosebuds (1982), the camomile bush (1984).  People who appreciate my grappas have learned to recognise them also by the labels of this extraordinary artist, who became a very dear friend.

Your link with the local countryside continued also in the distillation process?

I have always believed in the synergy of the land.  On my grappa labels there were the names of the marcs used to create the product.  Amongst serious producers there was created a bond and goodwill which made us become a compact group, built on trust.  At that time there was no way of making yourself known except by forming a group and using contacts that we all shared.

Do you remember when you sold your first grappa abroad?

Of course, but it was ‘abroad’ that came to me.  It was 1983, in just a few years word of mouth had made famous my grappas made from single-varietal Piedmont grapes.  Into the courtyard of my distillery came Germans from Stuttgart and some Japanese.  They wanted to buy the ‘Marolo Grappa’  that they had read about in reviews. 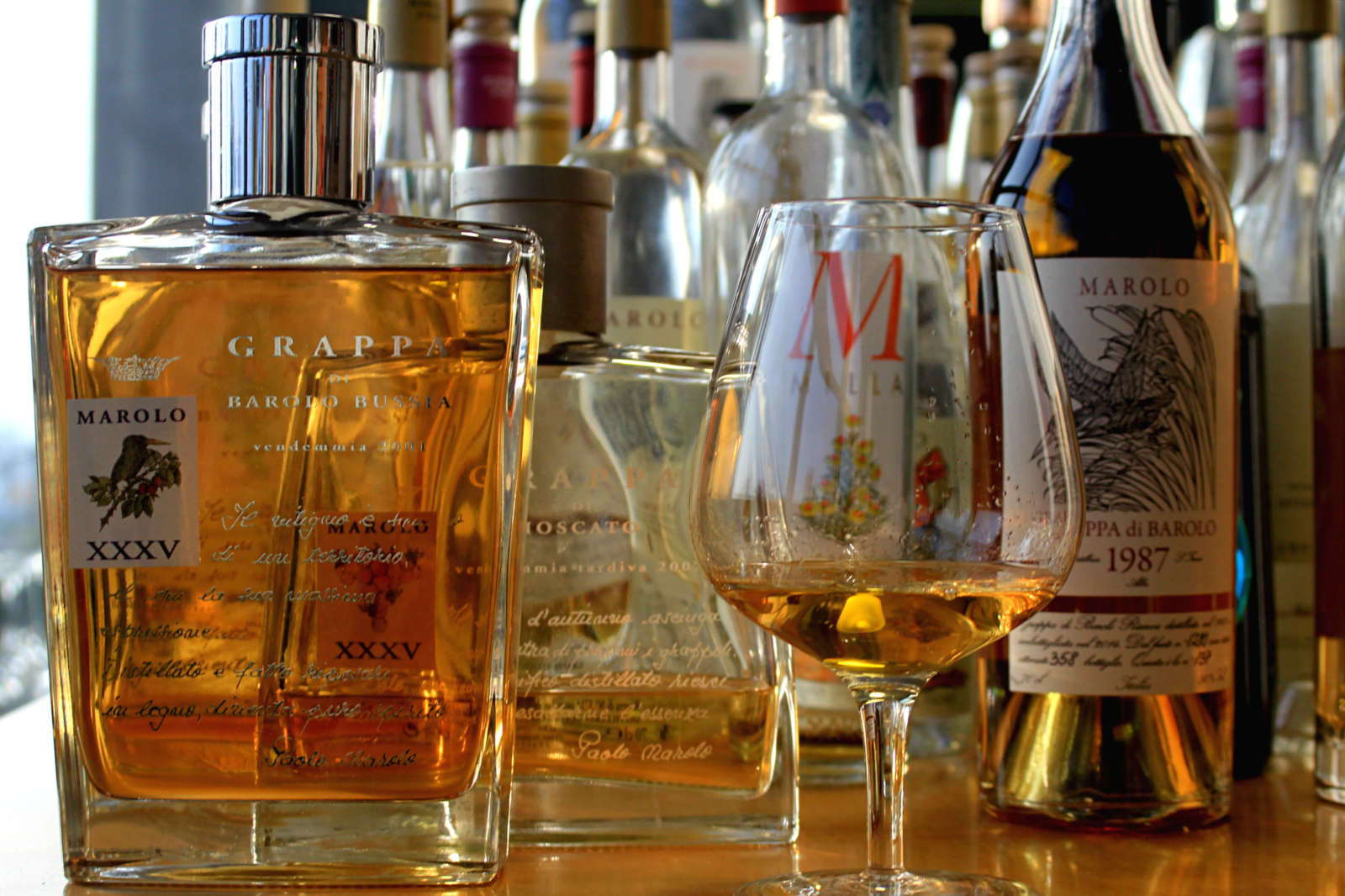 It was during that period that you distilled your first cru, the first single-varietal grappas?

Since the 1980s, winegrowing friends had been asking me to distill their marcs.  There was total trust amongst us.  I did not use their name but distilled under the Marolo label, indicating the producers of the raw materials.  It was a serious relationship, based on mutual respect.  Looking through the labels, there is a Muscat grappa Vigneto Sergente di Castiglione Tinella (1983); a Nebbiolo grappa from Barolo La Serra, cru of La Morra (1985); a grappa of Barolo Cicala, cru of Barolo Monforte d’Alba; a grappa of Barbera Pianpolvere, also from Monforte. I think I was the first to distill single-varietal Barolo grapes.  I had understood that even grappa can highlight and capture the essence not only of a vine variety but also the nuances of a single vineyard, from the prestigious cru that were emerging above all in the Langhe. After those came grappas from Barolo Bussia, Colonnello and Romirasco (vines forming part of the Bussia cru),  from Barbaresco Rabajà,  Arneis Renesio, Barbera Moriondo and many others.

You began also to distill marcs from outside Piedmont?

Indeed.  In 1979 it was the turn of Pigato, then Brunello, Vermentino, Gewürztraminer.  Today we distill from 48 different vineyards, each in an artisanal manner, individual and personalised, respecting the special characteristics of each one.