History of the alembic in modern times

We’re ready to conclude our series on the history of the alembic. From the very first pioneers of distillation through the alchemical search for “quintessence,” the modern era brings about a rationalization of distillation techniques. That is, the alembic is no longer seen as a magical, mystical tool, but an instrument that became increasingly efficient with the industrial age. The aim? To increase the alcoholic level of the distillate and study continuous cycle machines that distill all available primary ingredients automatically.

Three methods for heating alembics have been developed in modern times: direct flame, bain-marie, and steam.

Marolo uses bain-marie for distillation. An ancient technique, the boiler has a double wall; the steam circulates in the interspace, heating the marc placed inside the boiler. The ethyl alcohol and the substances contained in the marc evaporate, pass through distillation column and are then condensed into a coil. This method ensures a very gentle extraction of the marc aromas. 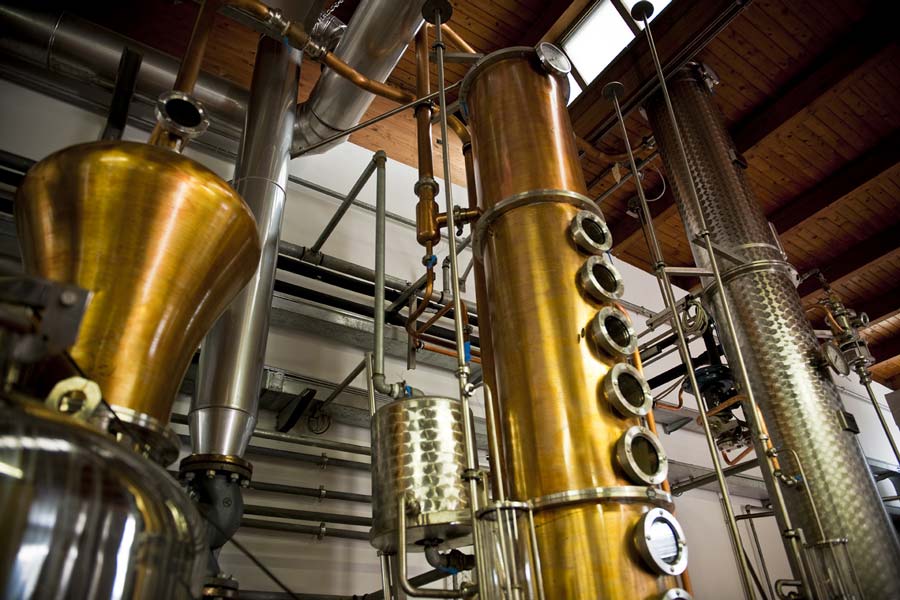 Detail of a bain-marie alembic from the Marolo distillery 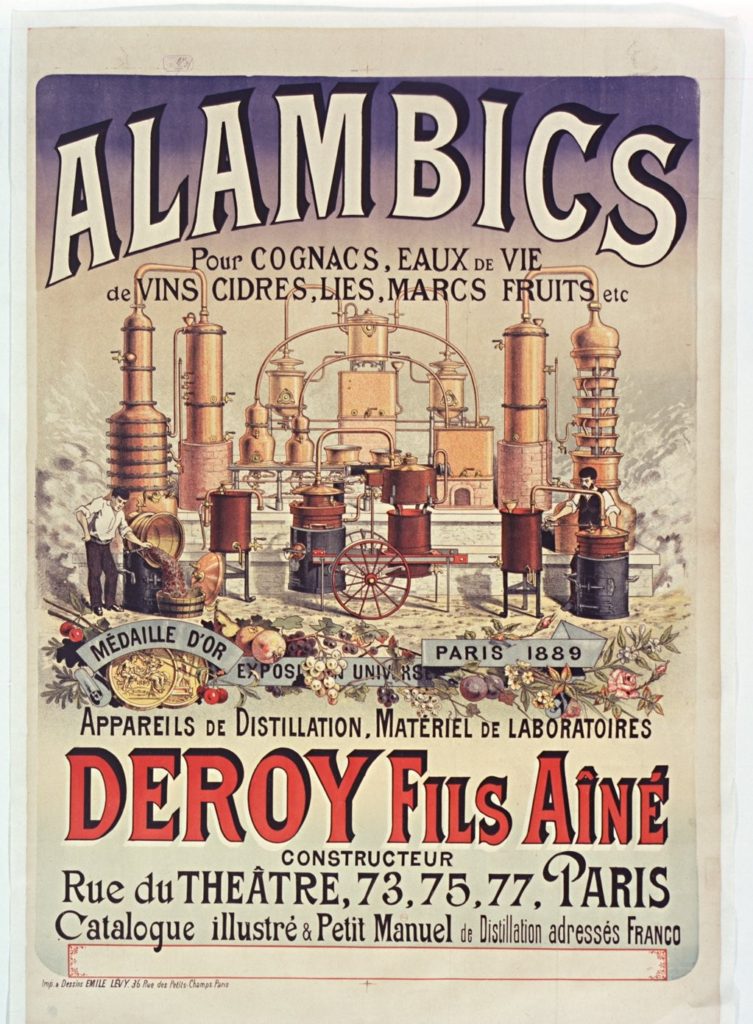 During and after the industrial revolution, new models of steam alembics were created that took advantage of the steam innovations. Steam alembics were perfect for distilling materials like marcs. One of the most widespread models was invented by the Parisian company Deroy. The alembic exploited a stream of steam that a generator aimed at a double broiler and added a rectifying condenser that helped obtain a more alcoholic distillate.

The condenser is an instrument that’s positioned on the cap of the rectifying column and helps the steam from distillation lose water faster and condense before arriving in the cooling section.

Beginning with the Deroy method, in order to distill the primary material more gently and extract the aromatic substances in the fermented material (such as the marcs of grapes), the corrente di vapore, or “jet stream” system was perfected. It used two boilers: in the first, an intense jet of steam was created, and the primary materials to distill were placed in the second. In the first boiler, the content was heated to its boiling point. Then, the heating was stopped in the second boiler. When the steam from the first boiler encountered the second, it carried all the volatile substances with it, including alcohol.

This technique in grappa-making was in large part discovered by Enrico Comboni (1850-1900), a chemistry professor of the enological school in Conegliano, from Asti. Today, over 90% of grappa is produced by steam distillation! 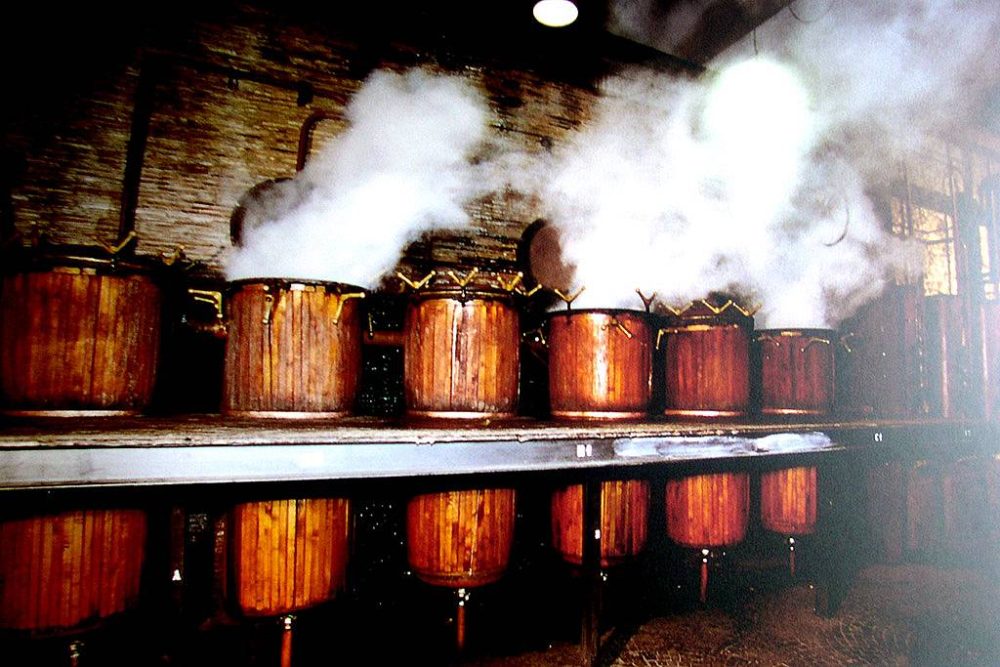 The original models of alembics had the inconvenient necessity of distilling in a discontinuous method, leaving a watery liquid after the first distillation that required a second distillation in order to reach the correct level of alcohol.

In 1800, the inventor Edoardo Adam created an apparatus that was separated into multiple oval vases, horizontally positioned and containing wine. This alembic allowed the less-volatile and more watery substances to condense first, thus increasing the alcohol content of the steam. But the true innovation was that, when the material to be distilled (wine, in this case) ran out, a hydraulic “door” allowed for a refill.

Up until the 1800s, alembics were small in size and therefore of limited capacity. Only a small amount of primary material could be distilled at once. With the invention of Edoardo Adam, industrial continuous distillation was made possible, a method that allowed for great amounts of alcohol in short amounts of time while completely using up the available primary materials.

With the passing of time, more devices were made and used alongside the “Adam method,” which was continuously perfected, up until the creation of modern alembics. One of the first devices was the precursor of the modern-day fractionating column, a fundamental component of modern-day alembics, invented by the Florentine Gablioni in 1813. Inside, small plates separate the mixture into its component parts, or fractions, based on the differences in volatilities, resulting in a distillate with a higher amount of alcohol and shortening the entire process. 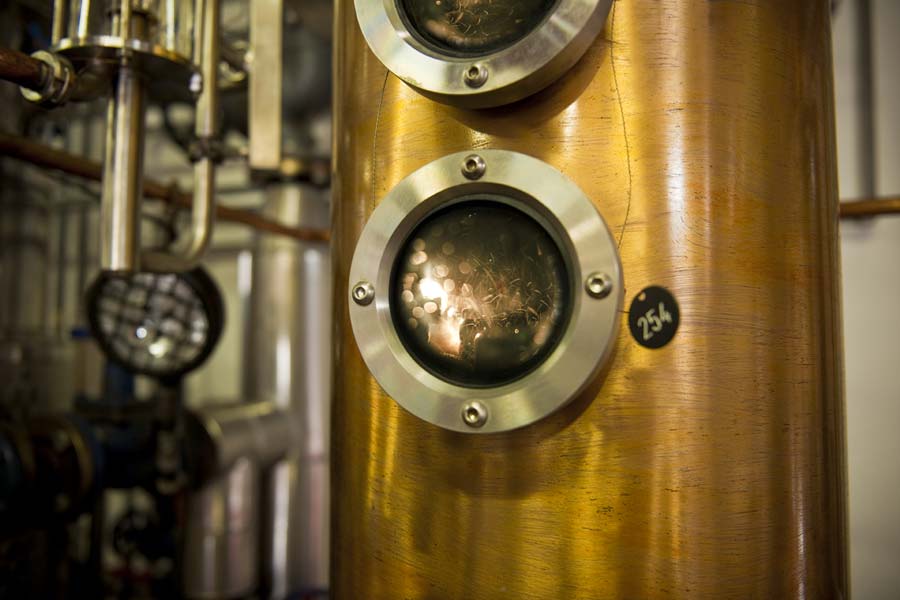 Between 1817 and 1899, alembic technology was constantly improving until an entire industry for distillation was formed, transforming enormous quantities of primary fermented material (wine, marcs, grains, juices…) into products with a high alcoholic grade, without interrupting the distillation process: it was called continuous distillation.

Continuous column luminaries include Pistorius, Cail, Callier-Blumenthal, Coffey, Savalle, Champonnois and Egrot, who were at the root of these industrial techniques, producing clean and chemically perfect distillates—but with standardized flavors. The fractionating column of today consists of a tall, horizontally subdivided container for fractional distillation in which vapor passes upwards and condensing liquid flows downwards. The vapor becomes progressively enriched in more volatile components as it ascends, and the less volatile components become concentrated in the descending liquid, which can be drawn off and discarded.

Beginning in the 1960s in Italy, industrial distillation factories for grappa sprang up. In these, the primary materials are automatically introduced by baskets in vertical or horizontal alcohol extractors. The marcs are fed from one direction where they are met by steam that takes up the alcohol and aromatic substances. By regulating the amount of marcs introduced, the contact between the marcs and steam could be determined, leading to the separation of alcoholic parts and volatile substances. When the marcs in the lowest basket was exhausted, the steams continued along the column plates, which separate the head and tail from the heart—an operation which is done manually in artisan production. 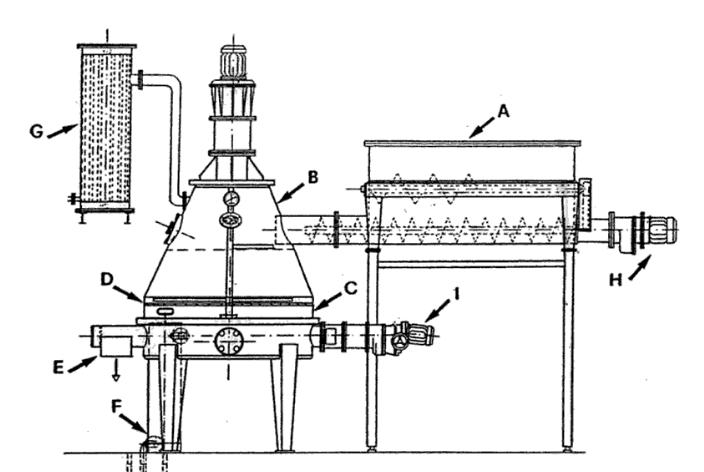 In opposition to the industrial, continuous method, some craft distilleries have rediscovered traditional methods of distillation. Combining modern technology and pre-industrial techniques, the 1970s saw a rebirth of the art of distillation using bain-marie, steam, and direct flame methods. These techniques certainly make for slower production, but also extremely respectful of the primary materials because everything is slowed down, quality-controlled by hand and by the experience of the distiller, who can make a product according to his or her own tastes and ultimately create a unique style and expression. 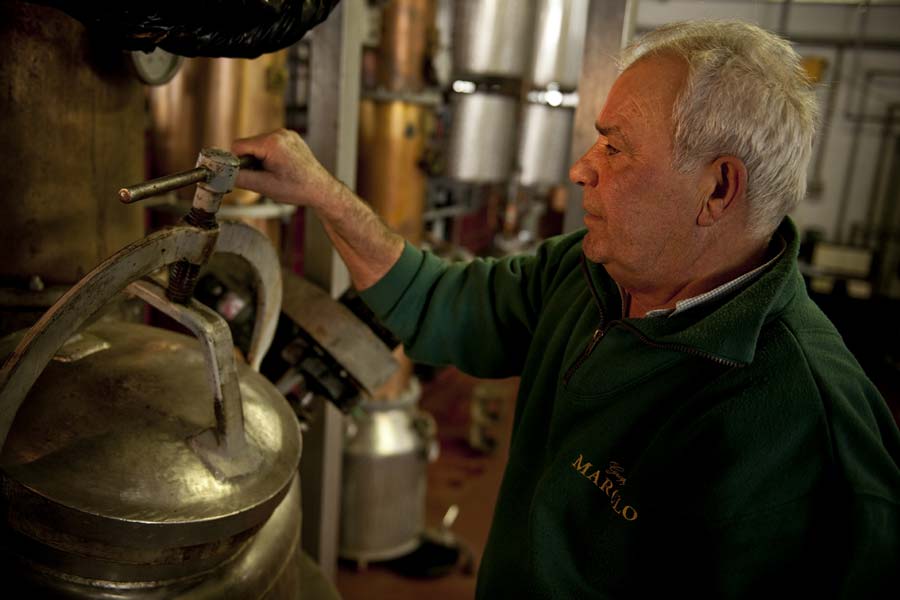