Did you know that one of the most important ingredients for a high-quality grappa is…water? It might surprise you, but Italy’s most famous spirit is, for the most part, made of H2O.

The water that is in grappa comes from two factors:

Water makes more or less half the volume of grappa, from 40 to 60%. The rest of the grappa (from 39 to 59%) is ethyl alcohol, of fundamental importance because it’s the solvent that contains many different substances (resin, alkaloids, polyphenols…) that give a grappa its aroma and color.

The ratio of water to ethyl alcohol depends on the choices made by the distiller and by the type of grappa he or she wants to make. No grappa can be below 37.5 % alcohol.

The importance of one percent

Now that we’ve established that water and ethyl alcohol are the principle ingredients of grappa, let’s try to quantify the other elements. We’ll look at a bottle of grappa that is 54% water, which means 45% is ethyl alcohol. This means that 99% of the grappa is composed of non-characterizing elements: water has no color, flavor, or scent; and alcohol is colorless with a “burnt” scent and taste, without flavor.

It begs the question: how can one perceive the nuances of a grappa and enjoy its aromas and the special flavors that each grape variety gives to this spirit?

The answer is in the details. More precisely, it’s in the 1% that we haven’t yet considered. All the art of master grappa makers is concentrated in this miniscule portion of the grappa. Hundreds and hundreds of substances can be extracted from that 1% that are at the base of the most important aromatic notes of Italian spirits.

What’s in that 1% that makes grappa so special? Let’s look at it in detail.

One of the most dreaded components: in high concentrations, methyl alcohol is lethal. The maximum amount allowed by law is 1 gram in 100 ml of anhydrous alcohol (or 100% alcohol). Methanol can develop during an imperfect conservation of the marcs or from a poor distillation of the head. Master grappa makers know how to maintain non-lethal methanol levels.

Higher alcohols have more than two carbon atoms in their chemical structures. The most important are isoamyl alcohol, isobutanol, propanolo, and 2-propanolo. This last was proposed as an identifying element for spirits made from marcs, because it’s not in other spirits made from wine. Higher alcohols form during alcoholic fermentation and the ensilage of the marcs. It gives very important notes to the grappa: vegetal and, when combined with acidic components, fruity aromas.

There are many different esters, which are very important for the flavor and aroma they give. They form from a combination of an acid with alcohol and play a fundamental role in creating a pleasing bouquet, giving pleasant flavors and scents.

The esters are divided into two groups: odiferous volatiles, which derive from acetic acid; and neutral, principally malic and tartaric acids.

Organic acids form during alcoholic fermentation and the ensilage of the marcs. The most common is acetic acid. In modest amounts, it helps reinforce the strength of the flavor of alcohol and enhances flavors and aromas because of its tendency to bind with alcohol to give aromatic esters. Among the different acetic acids, ethyl acetate is the most commonly present, and enhances fruity sensations. But, once these acids are present in too high an amount, they give acetone flavors.

Another important family is that of aldehydes, which are always present in grappa, even in very low concentrations. Depending on the type, they give different olfactive sensations, from fresh-cut grass to mold and, if the marcs were heated during distillation, burnt notes. The prized aldehydes of vanilla comes from aging.

Terpenes are a combination of carbonic acids and hydrogen in a chain formation. They’re the most diverse atoms, true natural “embroidery” with the many formations they can take. They come from distillation of the marcs and lend aromas that are most concentrated in grappas made from aromatic grape varieties, such as Moscato, Müller Thurgau, and Riesling. 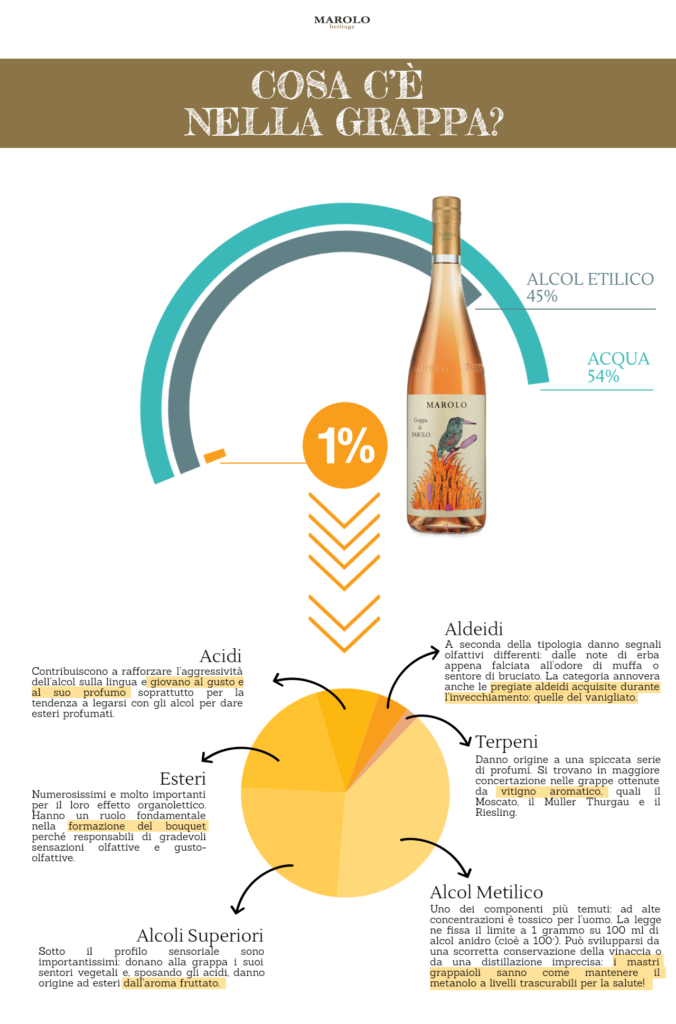