After a long legislative path, the data sheet, or Technical Specifications, defining the characteristics and production process of Grappa di Barolo has been published. Now it is up to the European Union to officially recognize it and protect this excellent Piedmontese product.

Before there were Geographical Indications, before there were decrees and even before the European Union, in Italy there was Camillo Benso, Count of Cavour. Numerous documentations show that the Count loved distillates made from the marcs of his vineyards in Barolo territory. His own refined tastes and strict preferences in the world of food and wine lead us to believe that the great statesman chose his raw materials with care and attention to make his spirits. In all probability, he obtained the marcs from Barolo-area nebbiolo vines and even helped nebbiolo reach its early fame, for the esteem he held for distillates made from these vines. Cavour was quite likely the first admirer and ambassador of “Grappa di Barolo”, even before it officially existed.

The process for recognizing Grappa di Barolo and protecting this Piedmontese product is a complex and fascinating story that will soon have a happy ending. On June 13, 2016, the Gazzetta Ufficiale number 136 published the Data Sheet (or Technical Specifications) for Grappa di Barolo, thus making certain characteristics and production steps of this Geographical Indication of Italian grappa the law.

Among the principle new items and achievements of the Data Sheet, there are at least two fundamental ones. The first posits that the entire productive process of Grappa di Barolo, which is obtained from marcs of nebbiolo destined for Barolo DOCG wines, must be carried out exclusively in Piedmont—including, of course, distillation. The second and more important one is that even bottling must be done in Piedmont.

The fact that distillation and bottling must be done on regional soil is one of the best consumer guarantees. It means that the entire productive cycle of Grappa di Barolo will be tied to a territory known for its great vocation and quality of products, carried out by producers who firmly believe in making this grappa the point of pride and excellence of Piedmontese grappa. All too often in the past, distilleries located outside of Piedmont were able to buy and distill nebbiolo marcs for Barolo, not respecting high standards of quality. One common practice was to buy the product in bulk and then bottle it elsewhere. 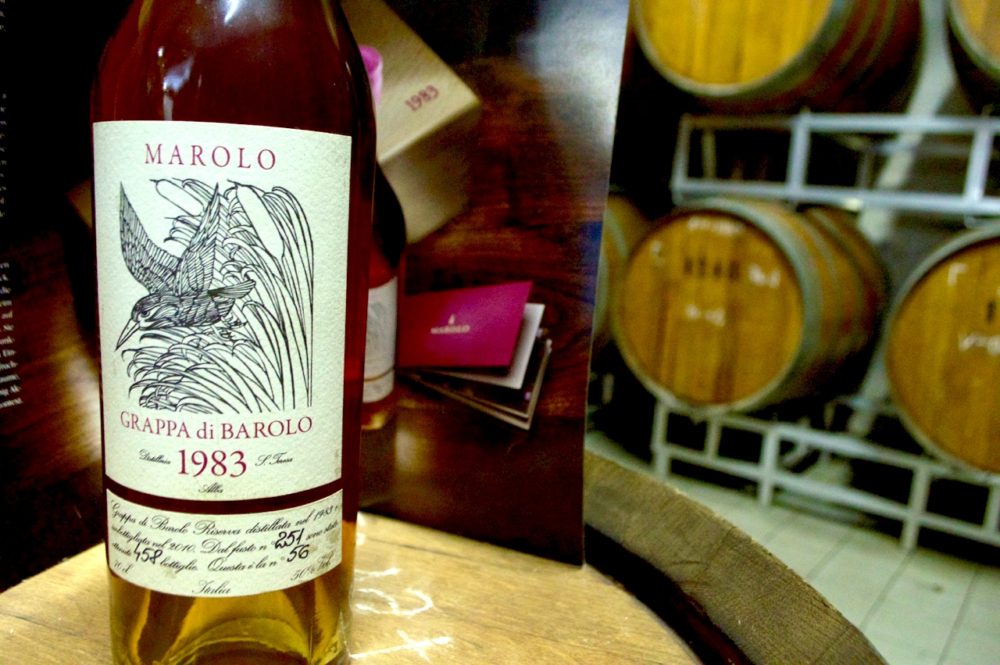 “The consumer had great difficulty finding a guaranteed product that reflected the prestige and high quality that Grappa di Barolo entails,” says Alessandro Revel Chion, former president of the Piedmont Grappa Institute and writer of the Data Sheet.

“Up until today,” continues Revel Chion, “the law that regulated Grappa di Barolo was a sort of law within the Geographical Indication laws for grappa created under CEE rules from 1989 and then rehashed under a decree by the President of the Republic of Italy in 1997. It left wide margins for interpretation, particularly on the bottling of IG grappa. In the past several years, Piedmontese producers have worked together to produce a Data Sheet that’s precise and technical and that protects Grappa di Barolo.”

“To create the Data Sheet, we also re-defined the technical specifications of DOCG wines, in which bottling and production are tied to the territory where the grapes are grown,” says Paolo Marolo, who personally followed the entire path towards official recognition of the Data Sheet. “We can finally have a Grappa di Barolo that is anchored to its territory of production, with the certainty that high quality marcs arrive fresh to Piedmontese distilleries. It is a guarantee for the entire productive cycle.”

Why can Grappa di Barolo be distilled and bottled in the entire Piedmont province, as opposed to just in Barolo territory?

“First of all, because no distilleries exist within the confined boundaries of the Barolo DOCG denomination. Second of all, because the name Barolo brings the name of Piedmont to the rest of the world. The new law allows Piedmontese producers to work together to offer a high quality and characteristic product of their region, which helps us be stronger and more united in its protection and promotion,” says Revel Chion.

After the publication of this Italian law in the Gazzetta Ufficiale, the ball passes to the European Union. It is now up to the technical committee in Brussels to examine the new specifications and to approve of them, thus making it a valid and definitive text for all members of the EU.

“We trust that Europe will accept our work and keep in mind the quality and authenticity that Piedmontese producers are capable of giving this product,” says Paolo Marolo in conclusion.