The grappa from Barolo Bussia is the spirit of the Langhe

The Grappa di Barolo Bussia is made from the musts of Nebbiolo grapes harvested from the one of the most prestigious Mezioni in the Barolo appellation. Marolo produces two styles of grappa from this vineyard, one that is young and bright, rich in aromatics and a special edition “Vendemmia 2004,” a quality reserve made only in the best vintages.

To understand the Grappa di Barolo Bussia you have to understand where it comes from. Bussia is a hilly strip of land between Monforte d’Alba and descends northwards towards Castiglione Falletto and is entirely planted with vines. The whole of Bussia is considered to be a single vineyard of around 300 hectares that is divided into 11 sottozone: Bussia Soprana, Bussia Sottana, Arnulfo, Corsini, Dardi e Mondoca, Fantini, Munie, Pianpolvere, Pugagne, Rocche e Maniscotto and Visette. Even more specifically, there are certain sections of vines that, while not officially considered sottozone, have such international fame as great Barolos they are often included on labels. Names such as Colonnello, Cicala, Romirasco and Gabutti. Bussia is one of the 11 Menzioni Geografiche Aggiuntive (MGA) of the municipality of Monforte d’Alba, one of the most renown areas in the entire Barolo appellation, with 68% of the cultivated vines being Nebbiolo dedicated to Barolo. It is from here that the pomace for Grappa di Barolo Bussia “Vendemmia 2004” is harvested.

The first Cru on a label

Bussia is the most celebrated Menzione in Monforte d’Alba, the icon of the entire appellation. But even with all the fame, its origins are a mystery. It has a history shrouded in the unknown. Maybe the name comes from Rio Bussia, the small creek of the same name that runs at the feet of the village. If so, then the names of a few of the sottozone are all the more poetic. Is Colonnello named after one of Napoleon’s colonels? Is Pianpolvere where his army collected huge amounts of gunpowder to power his cannons and rifles? No one knows for sure. What is certain though, is that “Bussia” has been talked about for over a century as one of the most renowned areas for Barolo and in 1961, along with Rocche di Castiglione, was the first cru to officially be named on a label.

One vine, many expressions

Since Bussia is such a large stretch of land with so many producers making wine, it is difficult to identify common characteristics amongst all the wines. However, there is a very important commonality; they all grow in the same soil. Wine scholars are able to trace a very precise geological boundary from Rio Bussia in the South up to Talloria dell’Annunziata in the North. To the west of this boundary line lays the hills Barolo and La Morra that are compsed of Tortonian soils rich in magnesium and manganese (the famous Sant’Agata marl). While on the East the municipalities of Castiglione Falletta, Monforte d’Alba and further away, Serraluna are made from Serravallian soils that are known for a great presence of iron. These soils are predominantly consisting of Diano Sandstone – layers of grey-bown and yellow sand or sandstone that formed in what is known as the Lequio Formation, red-grey sandstone and sands that are stratified between alternating layers of grey marl.

What kinds of wines are made in Bussia?

The Serravallian soils and Lequio Formation find their perfect combination in Bussia’s hot and dry microclimate to give life to very fruit, bold wines with strong tannins and renown balsam notes. They are wines of broad structure, ranging from highly mineral to much earthier, but are always elegant.

Marolo processes the pomace and must with great care and delicateness to ensure that the vines’ original notes and characteristics are preserved in each bottle of grappa. This is the case for both the younger Grappa di Bussia (La Giovane) and the Riserva and is achieved by using an artisanal distillation method – a discontinuous bain-marie. This is a very gentle method that relies on the technical expertise of temperature control and manual rectification to make sure that only the heart, where this is most aromatic properties, of the distillated is bottled.

The Grappa di Barolo Bussia “giovane” (young) is distilled as a white liquor that refines in stainless steel tanks. This preserves the bright scents of the original vine giving the grappa a wide bouquet of light floral notes and an ample, warm flavour.

This is the highest point of Marolo’s grappa production. The Riserva “Vendemmia 2004” is a Grappa di Barolo Bussia that has been aged for 12 years in small used barrels of oak and acacia wood. Why used wood? Because Marolo believes in preserving the original aromas and flavours of the pomace and does not want to overpower these with the ‘third’ notes of ageing in new wood. The result is a sophisticated and unique Grappa di Barolo Bussia that highlights the refinement of long ageing while still showcasing the balsam notes and flavours of the original vine.

The “Vendemmia 2004” is the second reserve Grappa di Barolo Bussia, the first being the “Vendemmia 2001” that was released for Marolo’s 35th anniversary. The 2002 and 2003 vintages were not made because the quality of the pomaces was decidedly poor. This current Riserva was made in 2004 from the fruits of an outstanding vintage, resulting in a rich and aristocratic spirit. Aromas of almost, tobacco and spices are balances by earthy notes of anise and licorice. It is a total sensorial experience of the true ‘spirit’ of the Langhe. 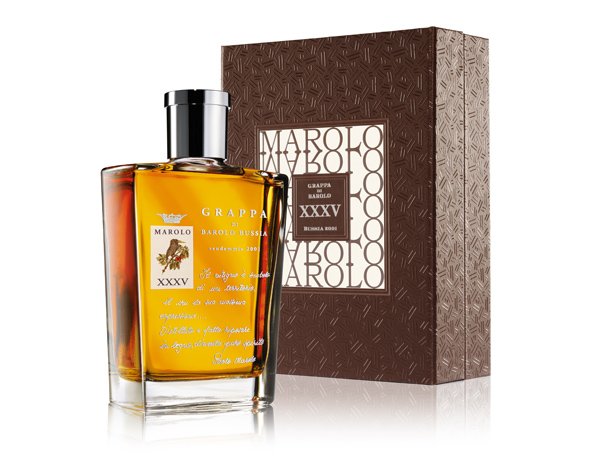