Brandy. How many times have we used this term to describe a generic caramel-coloured distillate, without ever really asking ourselves what we were drinking?

Brandy, just like Whisky, represent a vast category of spirits that, according to various laws and denominations, may have different names: from Cognac to Calvados, from Pisco and American Brandy to Italian Brandy.

>>> Read our article Grappa and Whisky, all the differences

Brandy is a spirit, and therefore it is a distillate made with fermented fruit. But if we want to be more specific, we can say that Brandy, in most cases, is a distillate made with wine. This is the first and fundamental distinction from grappa which, as we have said several times on this blog, is exclusively made by distilling pomace from vineyards growing on Italian soil.

Therefore, Brandy is a distillate made from wine, whose quality obviously affects the final product. To make Brandy, red, rosé or white wines that usually have good levels of acidity, low alcohol content and neutral aroma are used indifferently. Unlike high quality grappa, Brandy must not retain the organoleptic properties of the wine utilized: the distillation and, especially, the aging processes will be the ones defining its characteristics.

As regards to aging, each Brandy denomination has defined its own legal minimum period because – another difference from grappa – no Brandy can be marketed “young” or not aged in barrels. Sugar, caramel and flavouring can also be added to Brandy, in accordance to the regulations.

>>> Read our article Grappa, what does it taste like?

When was brandy born and why does it have this name?

The word “Brandy” comes from the Dutch word “brandwijn”, which means «burnt wine». If it is true that Italian alchemists – particularly the Scuola Salernitana – invented the distillation process, the Dutch were its prophets. During the Modern Era, they were the first ones to distil wine and market it on a larger scale, contributing in making their product known with the name with which it is still called today.

The English were great appreciators of brandwijn. We owe them the first written testimonials of the product: «Buy brand wine» appears in the comedy “Beggar’s Bush” attributed to John Fletcher, while «It is more fine than brandewine» can be read in the “Roxburghe Ballads”, an anthology containing more than 1,300 English ballads compiled by Robert Harley in the 17th century.

A fun fact? During the period of Fascism, an attempt was made to Italianize the word «Brandy», and the task has been entrusted to none other than the great poet, Gabriele D’Annunzio. He came up with the word «arzente», a term of Tuscan origin and an elegant form of the Italian adjective «ardente», which means «fiery, blazing». It has been a noble but unsuccessful experiment, because the foreign term immediately returned to use after the war.

The title of “Italian Brandy” is reserved to a spirit made in Italy from the distillation of wine produced with grapes grown and vinified within the national territory. The distillate must age for at least twelve months in storages located in Italy, inside containers (barrels) made of oak.

In order for it to be marketed for consumption, Italian Brandy must have an alcohol content not lesser than 38 percent in volume, and it can be diluted with water.

The law also regulates additions, which almost all Brandy producers make: sugar, at a rate of 2%; natural flavouring and aromas; caramel used for colouring. A common practice also involves the “aging” of the flavour of Brandy with infusions of oak shavings or other plant-based substances, or with the infusion or maceration with water or wine liquor, to a maximum level of three percent of the hydrated volume (a practice that is absolutely prohibited for grappa).

In Italy, the most utilized wine for the production of Brandy is trebbiano, whose grapes are crushed and fermented at a temperature between 18° to 22°C. Trebbiano is very suitable for its drained white colour, faint aroma, low alcohol content, good and constant level of acidity and resistance to oxidation. Fermentation must not contain sulphites because, during distillation, these might settle in the final product. 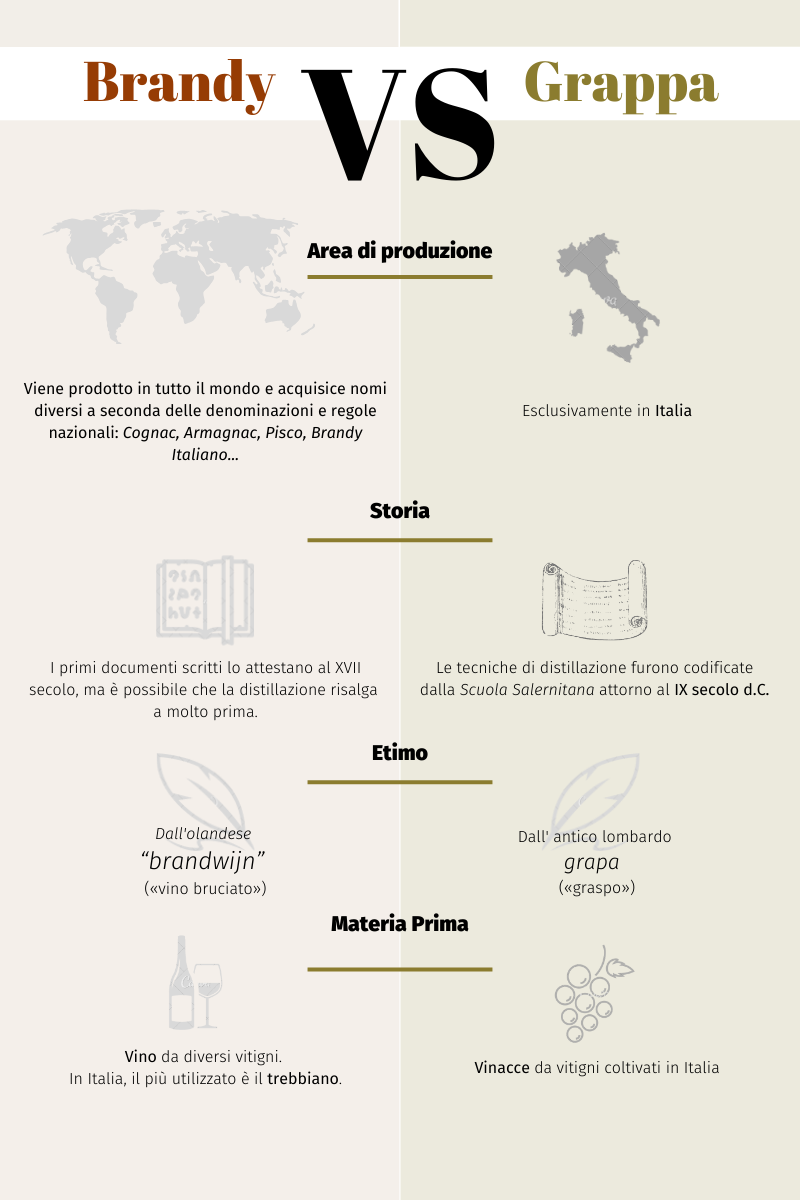 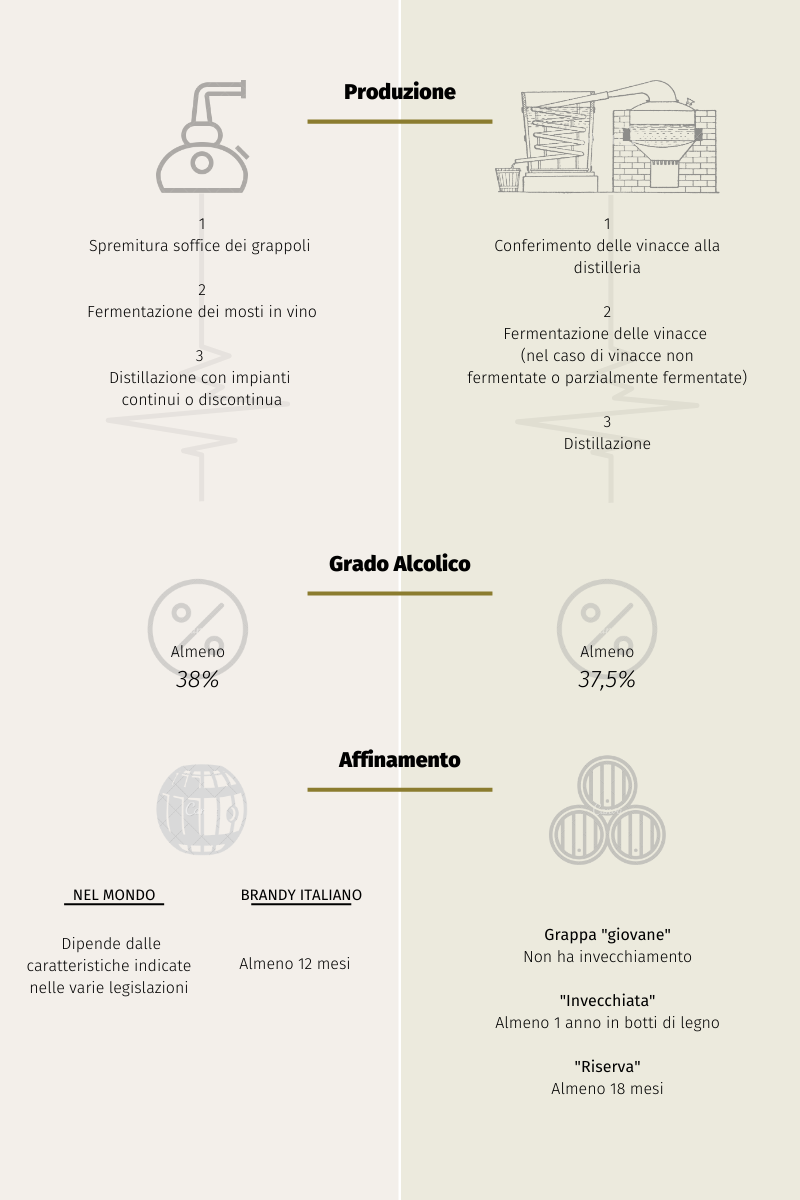