All of Marolo’s grappas are made with bain-marie stills. Let’s explore how this process works and what are its main characteristics.

OH, MARY. WHAT DOES THIS HAVE TO DO WITH YOU?

Nothing, really. Well actually, it does, just not the Mary you are all thinking about. The name is actually derived from Maria Giudea, an alchemist of the Eastern Roman Empire who lived at some time between the 1st and 3rd centuries AD. Although nothing written in her own hand has been found, her life and innovative work are referenced by later alchemists. Most notably were Zosimos and Panopolis, alchemists from the 4th century AD and wrote are what is considered the oldest alchemy records to date. Described as the pupil of philosopher, Democritus, as well as the daughter of Plato and a prophetess, Maria Giudea was, like many alchemists of a past, viewed as somewhere between a scientist and a sorceress; a philosopher and a priestess.

In the 14th century, many years after she lived, the physician Arnaldo da Villanova, was the first person to call the bain-marie distillation process in her name. Therefore, it is one of the oldest distillation techniques that we continue to use today.

HOW DOES A BAIN-MARIE WORK?

A still’s boiler is the dominant factor in how it distills raw ingredients, which in grappa is pomace, into various components. How it distributes heat can drastically change the rate at which alcohol is formed, water is evaporated and aromatic compounds are extracted. Generally speaking, the slower this process happens, the more refined and delicate the final product.

There are three styles of stills: direct fire, steam and bain-marie. In the case of the bain-marie, it works similarly to the stove top double-boiler pots; the still has an internal chamber that is immersed in boiling water or steam. The pomace in the internal chamber then warms up more slowly and more evenly. The ethyl alcohol and aromatic compounds evaporate out of the pomace into distillations column where they are then condensed into a cooling coil. As with all our artisanal grappa products, we rectify the distillate to extract only the ‘heart’ of the grappa and remove all the unwanted bitter compounds from the final product.

WHAT ARE THE ADVANTAGES OF A BAIN-MARIE?

Bain-marie distillation is the slowest distilling process currently used at the craft level. It takes more than an hour and half for each batch to ‘cook’ – exhausting the alcohol potential of the pomace. While this means a long time to create, the flavours and aromas extracted are superior.

The bain-marie ensures that the pomace is never in direct contact with a flame, nor is it passed through steam; the heat is applied indirectly. This allows for greater respect of the raw ingredients and preserves the characteristics of the pomace, essentially created a more refined grappa.

Thanks to the slow and delicate nature of a bain-marie still, the distillation process extracts the most superior aromas and flavours, the ones that smell and taste of the original Nebbiolo grapes. These grappas are true “spirits of the territory.” 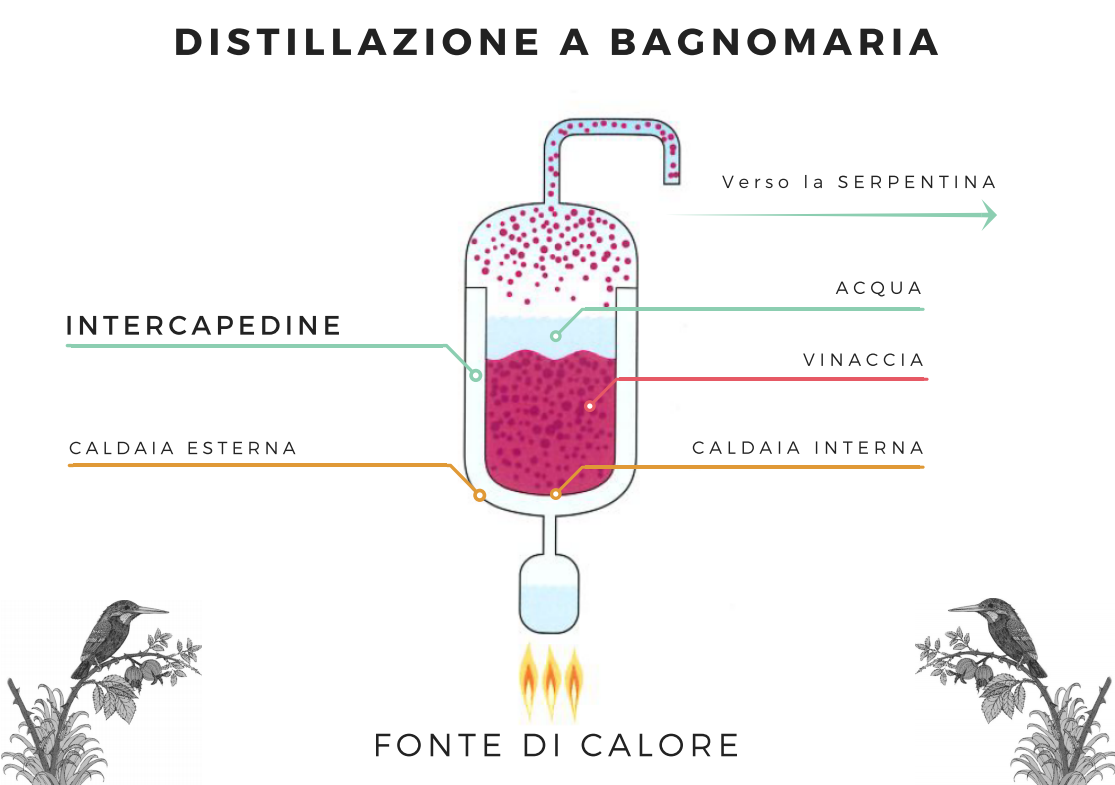 I have one question regarding the Bain-Marie still: Is the vinaccia mixed with water or is it placed in the inner chamber “dry”?