Baijiu and grappa, what are the differences?

Baijiu, who was this?

Baijiu is, quite simply, the most drunk distillate in the world.

This is because it is the “spirit of China”, the bottle that – instead of wine – is never missing on the tables of the Great Wall, where more than 20 billion liters of it are consumed every year! It is drunk during meals, proposed for toasts, offered in ceramic glasses to celebrate this or that event. Above all, drinking Baijiu is a social obligation in case of meetings, stipulation of contracts, official lunches, family or work events: everyone has a bottle ready to uncork and no one can refuse a glass offered … an apotropaic question. Like the Italian grappa after the war, Baijiu is the distillate that identifies the alcoholic traditions of a nation, and just like Grappa it comes in many forms, from industrial products at very low prices to unique artisanal productions limited to a few hundred pieces. , on the purchase of which one would spend the monthly salary of a (Western) worker.

THE PRODUCTION OF BAIJIU

The history of Baijiu dates back to 135 BC, an interesting chronological height because it is similar to the first Western information on stills, contained in the writings of Zosimo of Alexandria (4th – 3rd century BC). Baijiu, which in Chinese means “white liquor” was made by digging holes in the ground and fermenting a mixture of water and cereals. A technique that has influenced contemporary production, which differs greatly from the production of Western distillates.

The raw material from which Chinese brandy is most commonly obtained is sorghum, rice, but also wheat, millet, corn, barley and other cereals. The cereal is prepared by grinding it, wetting it with hot water and then steaming it suspended on wicker baskets. We then proceed to spread the surplice on the floor so that it can cool. It is at this point that we proceed with the inoculation of qū, the mushroom responsible for alcoholic fermentation. The peculiarity of this phase is that steel tanks are not used, but – as in ancient times – clay pits dug directly into the ground where years (even centuries) of continuous fermentation have produced a bacterial flora that acts on the mass of cereals as they could making old barrels on wine.

The distillation of the fermented product takes place by steam (in boilers similar to those used for the steam distillation of grappa) and several distillations can be carried out, until the sugars are exhausted and the desired alcohol content is reached. Aging, on the other hand, is very different from that of grappa: Baijiu matures in vitrified terracotta containers for at least a year before being diluted to the degree of consumption. 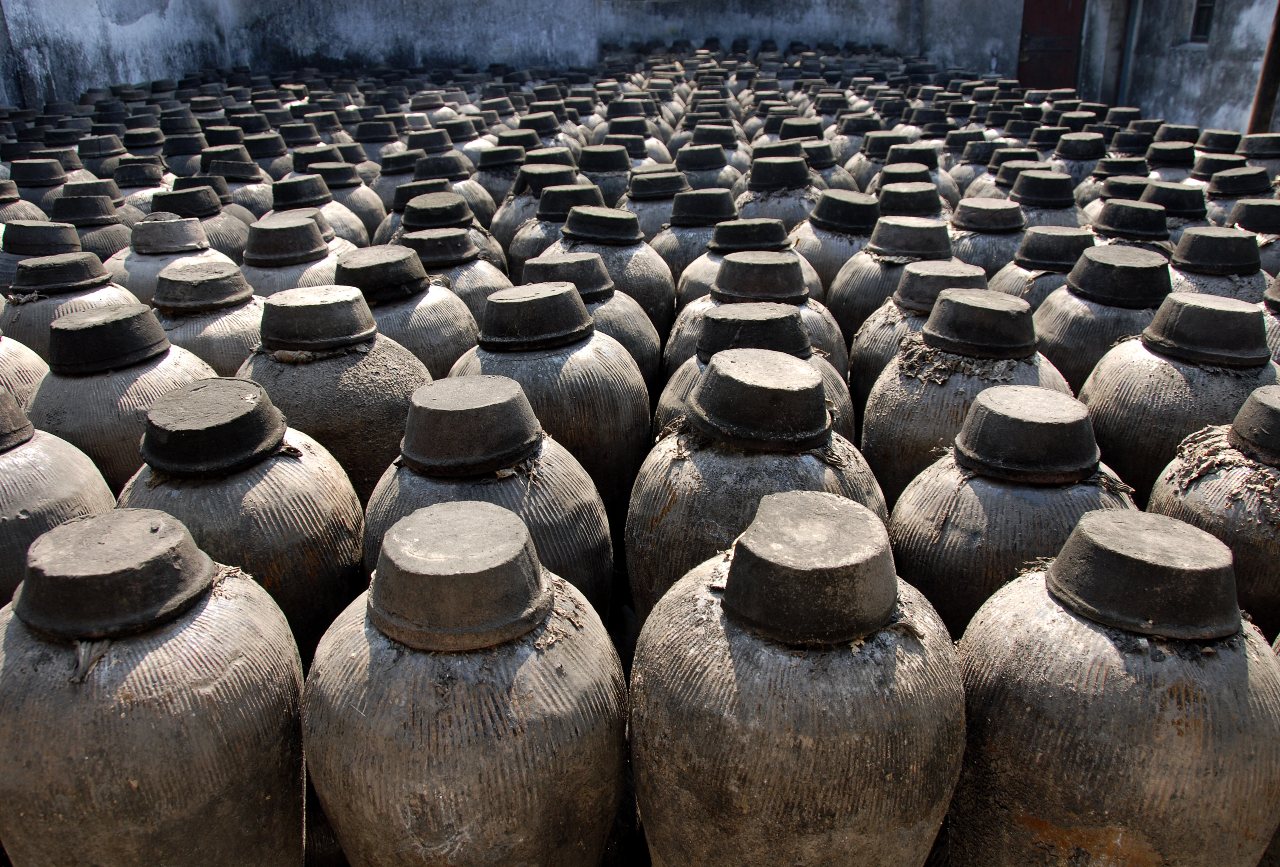 Terracotta amphorae in which the Baijiu refines

There are obviously less refined methods than the one described, since the manufacture of brandy is the heritage of the whole of rural China, and its quality depends very much on the quality of the inoculum, the fermentation and distillation techniques, as well as the use. of different raw materials or mixed together.

This difference in techniques and, above all, in the materials used establishes the value of Baijiu, whose most precious specimens are considered on a par with our rarest spirits.

One last difference should be underlined with respect to grappa. Baijiu, typically, has an alcohol content of almost 60 ° and has a rather “aggressive” character, rich in earthy and herbaceous flavors that can make it “grumpy” on the western palate: this is why almost no one has heard of Baijiu beyond outside the Great Wall, and even fewer non-Chinese consumers.

The big brands of Baijiu, however, have not given up. Riding on the history of this millenary distillate, they are entering the western market with particularly rare and refined versions of Baijiu (such as Moutai, also called the “liqueur of the emperors”), or a little more “neutral”, suitable for the preparation of cocktails. with an undoubted oriental charm.

Who knows if, in a few years, we will find ourselves ordering a “Peking” Mule in the bar downstairs, where Baijiu has taken the place of Vodka?