Aromatic Grappas, Flavoured Grappas And Liquors: All The Differences

Grappas are divided into four main categories based on the aging period: young, refined, aged and riserva. But there is also another classification, based on “flavour”: in this case, grappas can be classified as aromatic or flavoured. Lastly, we also have liquors, which can contain grappa as a base.

In this article, we will focus on identifying the main differences between aromatic grappa, flavoured grappa and liquors.

Aromatic Grappa refers to grappas produced from the pomace of “aromatic” varieties, namely vines packed with very fragrant substances, starting from the very grapes. Once distilled, they produce grappas with a very distinct aromatic profile. Aromatic Grappas, in simple terms, are spirits with specific and distinctive aromas, generally more intense and recognizable.

How are these aromas achieved during distillation? Aromatic grapes are part of only four varieties in Italy: moscato, traminer, brachetto and malvasia, each producing their respective aromatic grappa. These types of grapes have skins rich in terpenes, organic compounds that have very strong odour and are naturally produced by plants. During distillation, terpenes are extracted together with alcohol and if the process of rectification of grappa properly takes place, they manage to “pass on” to the final product, marking it with their aroma.

Aromatic grappas are usually packaged and marketed young, without aging them in wood, in order to not let the aromas given by the aging wood overlap the main ones (those from the grapes). However, this is not an iron rule. The Grappa di Moscato Vendemmia Tardiva 2007 di Marolo, for example, ages in small oak barrels for many years. The typical aromas of white moscato are expressed in citrus and almond notes that, together with secondary hints of dried fruit, create an enveloping and persistent distillate. 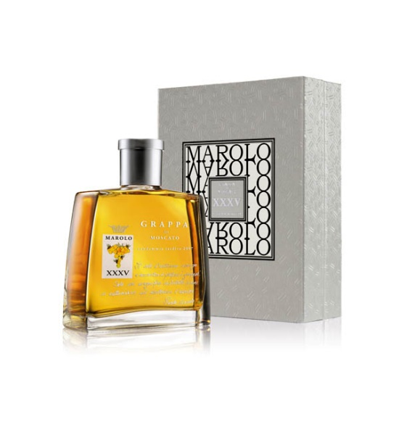 Flavoured Grappas are a totally different matter. In this case, we have grappas whose sensorial profile is enriched with aromas and flavours obtained from medicinal herbs and spices. Flavoured grappas can be made by macerating into the grappa fresh or dried medicinal plants, or fruit, which must be stated on the label.

Alternatively, they can be made with alcoholic tincture. Alcoholic tincture is a separate process: it is made by leaving the aromatic plant or spice soaked in alcohol (whose concentration varies according to the type of extraction and the plant used) for a period of time ranging between 5 to 10 days. At the end of the stated period, the solid parts are filtered from the liquid ones, which are then added to the grappa, based on the desired quantities.

But, be careful: the quantity of alcohol to be added to the grappa through tincture is regulated by law and must not exceed 3% of the total.

Alcoholic tincture is useful because it allows the flavouring of grappa starting from the same base and it is easily scalable, enabling the attainment of homogenous results.

Another type of flavouring allowed is that of direct maceration, which require the immersion of officinal herbs or spices directly in the chosen batch of grappa, in the due proportions. The time of maceration varies in accordance to the officinal plant utilized and the alcohol content: it must neither be too short, to allow the extraction of aromas, nor too long, to avoid releasing unwanted flavours.

Flavoured grappas may be enhanced by adding sugar, which gives a more harmonious and rounded flavour. The law allows the addition of a maximum of 2%, or not more than 20 g/l.

The difference with liquors lies in sugar. In fact, a liquor is a spirit made by flavouring ethyl alcohol or a distillate using other food products: medicinal plants, fruit, cream, milk, wine or flavoured wine. Its difference with flavoured grappas is given by two elements. The first one concerns alcoholic content, established by the law at a minimum of 15% (while grappas have 37.5%); the other has to do with sugar content, which is between 70 and 100 g/l for liquors.

MILLA, A LIQUOR MADE WITH CHAMOMILE

Marolo’s Milla belongs to this last category. It is a liquor with a grappa base, obtained through the infusion of chamomile flower heads in nebbiolo grappa, according to the typical recipe of the Langhe.

The flowers are soaked fresh and the grappa extraction gives an exceptional floral bouquet: soft, persistent and pleasantly enveloping. However, fresh chamomile flowers also releases their naturally bitter taste. In order to make the flavour more harmonious and balanced, a small portion of sugar is added, exceeding the 20 g/l limit stated by regulations, and making Milla a liquor with a “heart” of grappa.