A very limited edition unique, prize grappa. An ode to Piedmont, its extraordinary vocation for winegrowing and the expertise of its distillers. A special edition celebrating forty years of history and love for grappa, this is the new Grappa di Barolo aged in Barolo Chinato single casks – pure distilled emotion.

To make an aged grappa, takes a dream, a vision that embraces the long term, understands the evolution of flavours and can imagine the changing colours. It also takes long experience involving striving, trial and error. And finally, it takes a good pinch of folly, because every aged grappa is like a great love, it won’t last if it can’t also envisage the future.

An idea of Piedmont

Ten years ago, when we conceived out exclusive Grappa di Barolo, we worked on a precise idea, that of narrating Piedmont in all its magnificence – its extraordinary vocation for winemaking, its landscape, its love of the good things in life, and above all, its drive to innovate and play with tradition to revitalize it and add a new piece to our history. 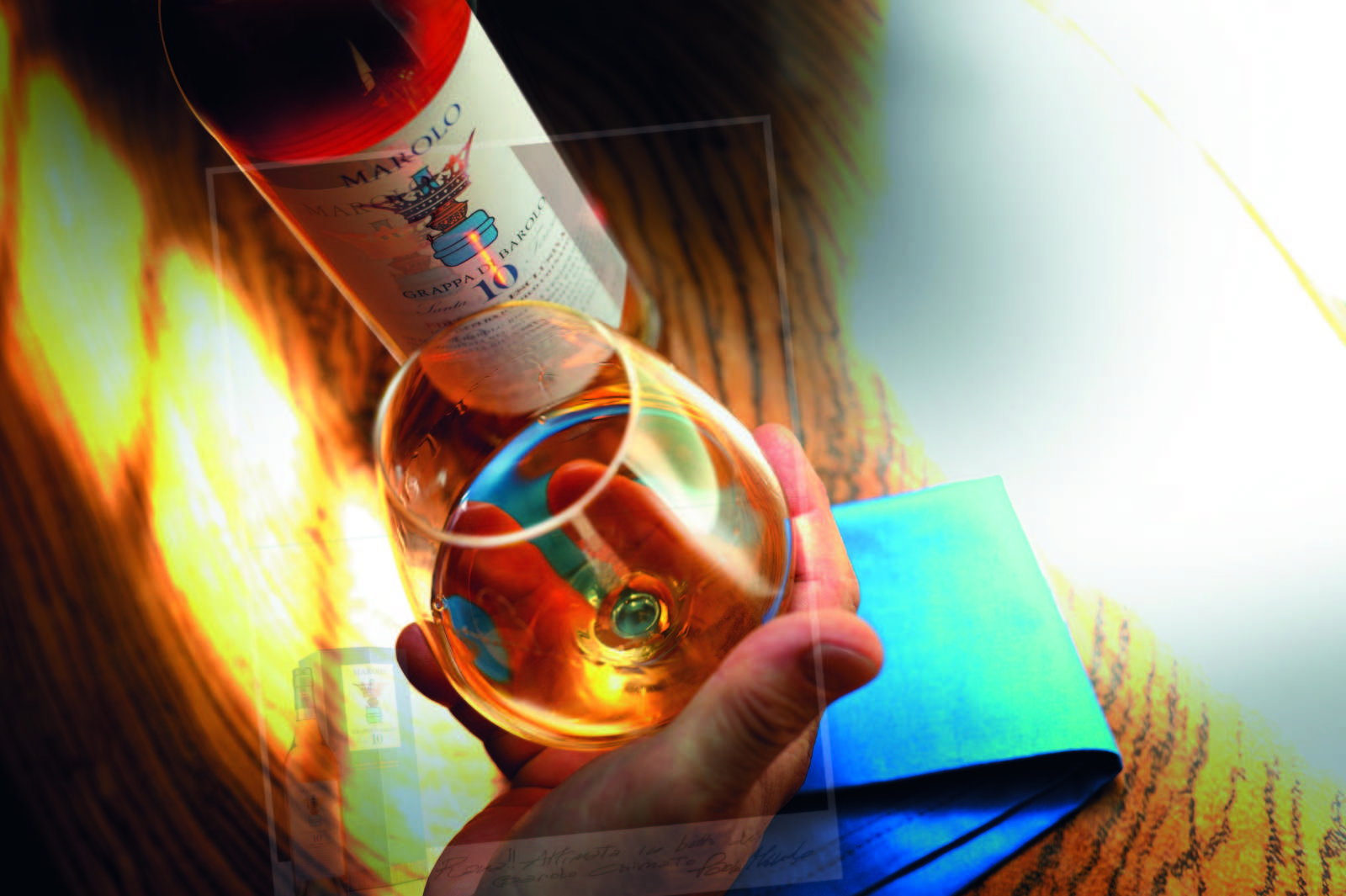 To ensure our grappa spoke Piedmontese, we made precise, coherent choices. We started with an IGT (Geographical Indication) top quality, full-bodied white Barolo grappa with a masculine character. Rather than ageing it in casks used for foreign spirits, we chose the indigenous route – Barolo Chinato single casks that we use to produce our Marolo Chinato. The result was a product that pays tribute to the “king of wines” in its most complete expression – the warm enveloping body of the Grappa di Barolo combines with the spicy notes of Barolo Chinato, an aromatized wine that has been made for over a century and celebrates the fruitful union of two areas of Piedmont excellence, winemaking and herbalism.

Our 10-year-old Grappa di Barolo aged in Barolo Chinato single casks was created to celebrate the Marolo Distillery’s 40th anniversary, and above all, to share with its aficionados Marolo’s unceasing urge to experiment, to continue its research into woods for ageing and offer always new but sincerely authentic products. 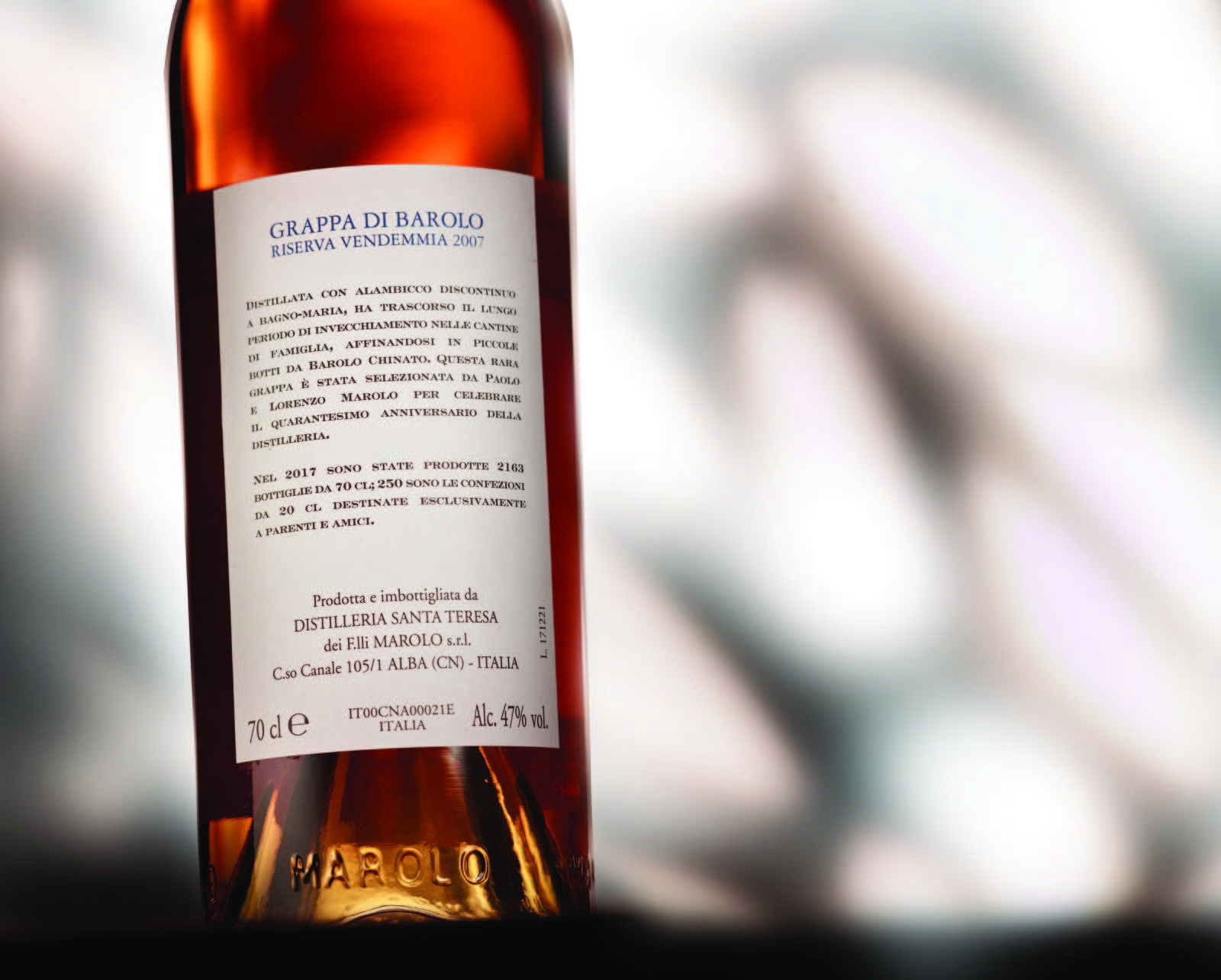 Exclusive doesn’t just mean precious and limited in number, but also unique, rare and impossible to duplicate. A ten-year wait to enjoy just 2,163 bottles, and 250 20cl bottles given to friends and family during the 40th anniversary party.  We haven’t repeated the experiment in the years since – it might be another 10 years before it can be savoured again.

«A unique Grappa di Barolo: perfection of a spirit
of noble origin, sublimation of a fortified wine»

Why doesn’t the kingfisher, Marolo’s signature emblem, appear on our Grappa? Because we wanted to honour Gianni Gallo, the great Piedmont artist and creator of our labels.  The oil lamp was Gianni’s very first design for the newly-established Marolo Distillery, for a Grappa di Arneis.   The artist later added a crown to celebrate the market launch of our first aged Grappa di Barolo, distilled in 1977. The crown that features on the label of our Grappa di Barolo aged in Barolo Chinato single casks is a tribute to the “king of wines” and “wine of kings”, one of the world’s finest Italian reds – Barolo. 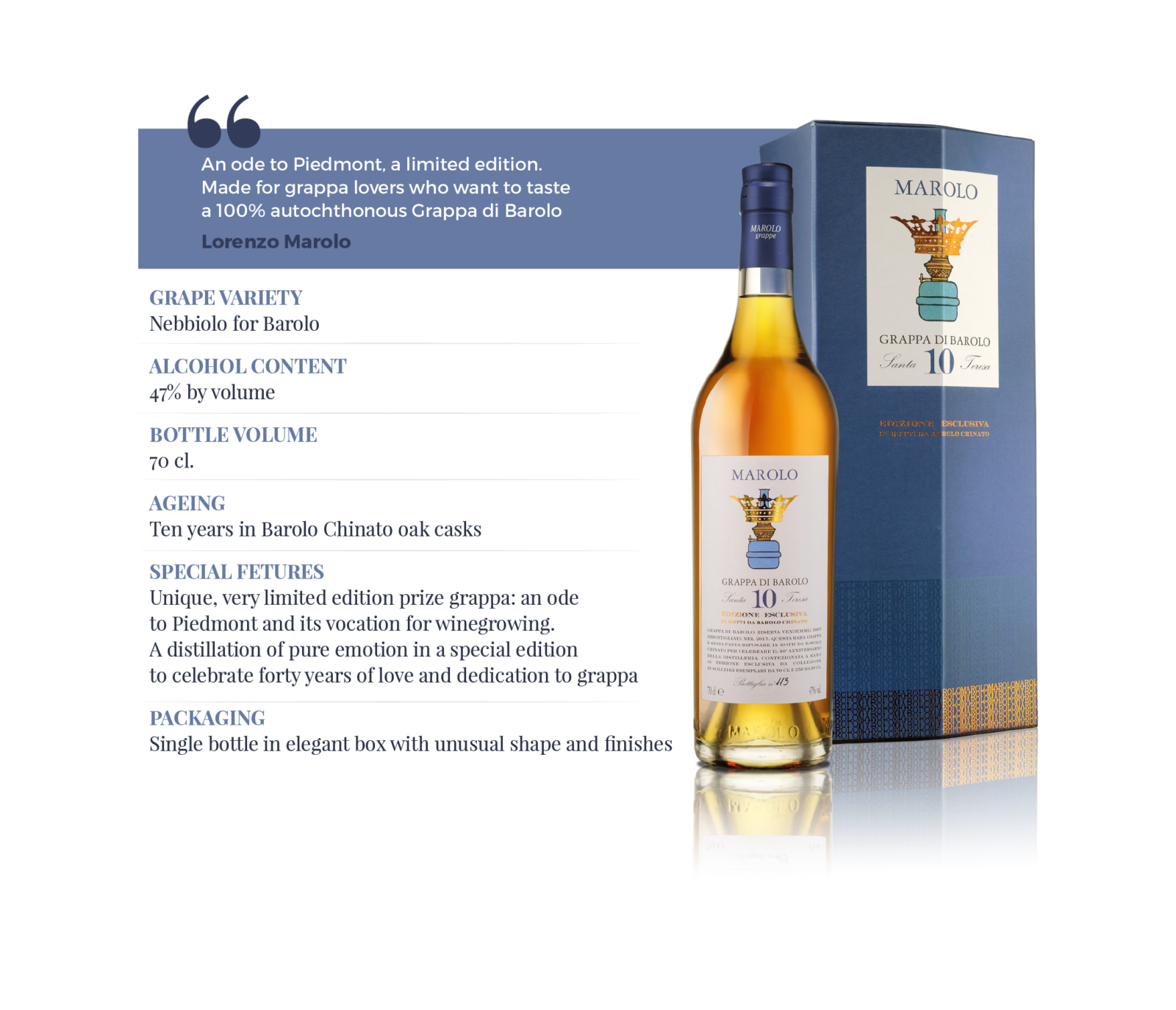